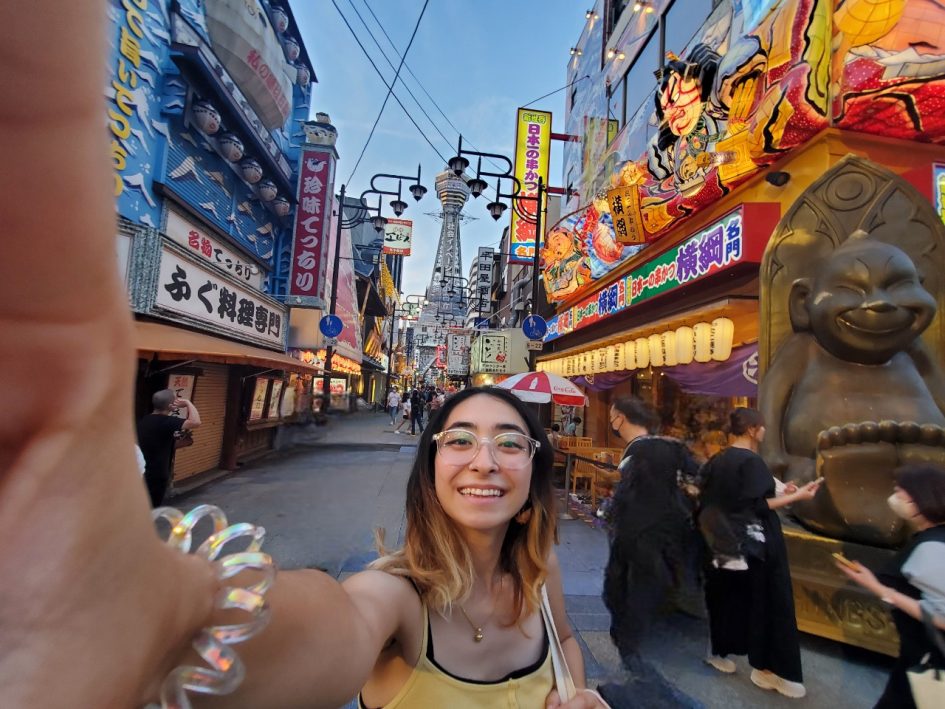 Translation of Title: It’s an old Japanese proverb that essentially means, Time/Life Flies Like an Arrow

I’m so grateful for the blogs providing a meditative space to reflect upon the month that has just passed because, my goodness, it has been an absolute blur. I feel like I’ll likely keep saying this, but I cannot believe I’m past the halfway mark of my internship! Every week has been packed with excitement and reflection so, in an attempt to keep a record of them, I’ll walk through the significant occurrences of each of the past 4 weeks.

Despite being a short 40-minute train ride away from Kobe, I hadn’t had the chance to visit Osaka until my second month here. I had heard from friends that it was an entirely unique atmosphere but I don’t think I was ready for how different and eclectic it actually was. The first thing I noticed was how busy and bustling the city was with so many different kinds of people. Sidewalks and pedestrian bridges were packed with people with colorful hair, bright outfits, and clashing patterns. Although I knew that Osaka’s eccentricity and flamboyancy were infamous and often the butt of jokes in the rest of Japan, I absolutely delighted in it. In Osaka, I suddenly felt like I did not stand out as much. It was such a breath of fresh air and relief that I was not aware that I needed. I think I especially felt like this because Kobe is known for being a luxurious and elegant city, so I noticed it to be a lot more aesthetically conservative.

I made my way to the list of recommended places that my friend compiled for me and I got to see so many little gems in the city. There were so many unique ancient shrines and temples tucked away hidden between bright neon lights and flashing LED billboards, it felt like stepping through anachronistic timewarps.

Week 2: Reuniting with my Extended Family

Having worked at an event during the weekend in September, I was able to take some compensatory time off and visit my extended family in Tokyo. Although we had lightly kept in touch over the years, I hadn’t seen them in years. With my mother and sister also going to Tokyo, it was probably the first time in 8-ish years since the whole family was together. I was beyond thrilled to see them. Throughout my childhood, my mom, sister, and I would spend our summers in Japan with my aunt and her two daughters, as we are all roughly one or two years apart. My childhood and adolescent memories of Japan are inextricably linked with the six of us being together so it meant a lot to us that we would finally have that chance. Before meeting, I was curious whether, and if so how, our dynamics might’ve changed. The last time we had been together we were all still children, and now we were all kind of fully functioning young adults. Indeed, when we first reunited, it felt like I had accidentally skipped a chapter of a book or fast-forwarded a movie and was missing part of the plot’s crucial development. The surreal feeling of our encounter was amplified by the fact that our relational dynamic had not changed so much, so it further felt like the people I once knew were encapsulated in the bearings of familiar strangers (an oxymoron, I realize).

When we were together, I felt like I was in a liminal space of both reliving the past whale acutely aware of how much time had passed since said past. Even after the initial novelty of our reunion melted away as we spent our days together, I kept getting hit with the weight of the passage of time and how much we have experienced and changed as people (outside of our internal relationship).

On the third weekend, I visited Kobe’s renowned foreign settlement. Kobe was one of the first cities to open for trade with the Western world in 1868 and thus has a long legacy of foreign settlement and interaction. Nestled in Kobe’s dramatic hills is a small neighborhood formed by a cluster of historical residences and buildings that housed diplomatic and business foreigners ranging from French, Chinese, and American.

Week 4: An Informal Highschool Get Together

On the last weekend of the month, the CityNet Plus Arts Kobe office flew to Tokyo to assist with a disaster risk reduction educational event. Although it was an event open for all, it was primarily targeting younger children who are just getting acquainted with the basics of disaster preparedness and response. I was assigned to the crafting booth, where we would teach children how to make basic objects out of readily available objects such as newspapers. The two-day event was a huge hit, with volunteers and supporters signing in from 8:30 am to 7:00 pm. Although it was incredibly busy and exhausting, I found it to be an incredibly fun and rewarding experience.

Dear Reader, my name is Giulia Gagliano-Tsuda and I'm currently wrapping up my Political Science and Gender Studies degree at UVic. I will be working for four months with CITYNET PlusArts in Kobe, Japan. During that time, I will be filling this blog space with my experiences, reflections, and updates as I embark in this once-in-a-lifetime opportunity.