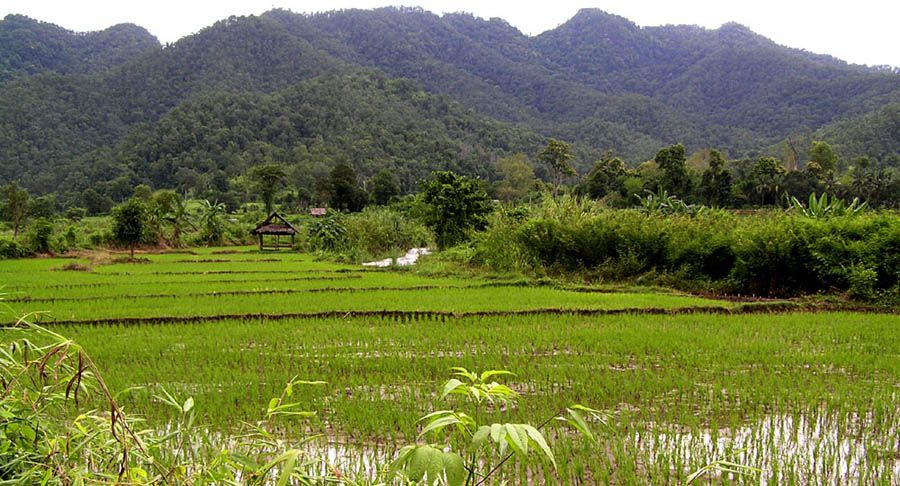 Water covers much of the Indochinese peninsula. It flows to the valley floors, where, in close proximity to the agriculture activities, most of the human settlements are found  Rice paddies cover large swaths of the cultivated landscape; the staple grain grows in large pools shaped together like puzzle pieces. Beyond the orderly fields, a dense jungle begins, where foliage prevents vision further than 15 feet. Roads have been carved through this difficult landscape weaving and turning their way around hills that push the trees closer to the sun.

In northwest Thailand, about a thirty minute drive from the nearest domestic airport in Mae Hong Son, is the Karenni Social Development Centre (KSDC).The road follows the Soi river as it winds through and around farmland and temples. Ban Nai Soi will be your last stop in the journey. As you look across the valley a red chapel peeks through the trees at the crest of a hill in the village I call home.

The final leg is a dirt road winds its way through rice paddies and across a river. During the rainy season the river flows over the concrete bridge. A walker must remove their shoes and hike up their pants, a truck must be lifted, and a motorbike might be left on one side of the river (better than flowing into the current on a vehicle that is the primary source of transportation for most people).

As you reach the other side of the valley the town of Dokita appears. The village is made up of at least three convenience stores, two schools, numerous houses, a red steepled church, a football pitch, and a volleyball and cane ball court each. However it is the entrance to KSDC that you see first thing when you enter the village. It is here that many of the future leaders of the Karenni State educate themselves in Work Skills, Technology, English, International Law, and Social Science. Coming down the driveway, Florence the neighbourhood pig offers a welcoming snort. A few metres onwards two mango trees shade the buildings that make up KSDC.

KSDC is a boarding school. At writing, it provides room and board for 28 students and 3 teachers. The boys share two equal sized rooms on the top floor of the rancher style two story building with upper floor walls built of thatch. The girls take the bottom floor, and two other rooms adjacent to the lower classroom and dining room. All except for a few of the students sleep with a mat on the floor, and even less with mosquito nets, opting rather for mosquito coils that fill the room with an incense like aroma.

The other 3 teachers sleep on the top floor of the building across the courtyard from the main dormitory building. As you enter through the doorway the main office and computer room are in front of you. Directly to the right is a short flight of wooden stairs leading up to the living space. A potted bamboo plant, beside a supporting beam in the centre of the room, gives the space life. So to do the office pets Apu the cat and Binks the dog (who is often found “guarding” the bottom stair). Apu is a gentle white spotted cat who includes the office as her territory, and Binks a sweet, albeit noisy, puppy is the newest addition to the KSDC family. The humans in the space are myself, Izzie Simons, my fellow English teacher and soon to be UVic Political Science graduate, and our friend and colleague, Khu Oo Reh, the Work Skills teacher and a KSDC alumni. Around the shared living room are a printer, three cabinets, two bookshelves, a desk, a floor mat for relaxation and reading, an office from where I now write, and our bedrooms.

The first of two classrooms is at the highest point of the school. It almost warehousesque, but with an interesting quirk. The building is divided into two separate areas divided by a 7 ft wall. In the larger space, tables and chairs sit patiently in front of a whiteboard; this is the upper classroom. The other space tucked behind the classroom, is a suite where Atrei, a local man living with schizophrenia, resides. The community is called Dokita, which translates to handicap, and while many young families now live in the area, a few of the people that this community was named after still call this village home.

Down a set of stairs, and directly beneath the living spaces of the teachers, is the lower-classroom that also makes shifts as the dining hall at meal time. It is at this point in the tour that the quaint beauty of the school begins to unveil itself. Behind where the students learn a concrete veranda looks over the farmyard, a plain where chickens roam, dogs play, jackfruit, coconut and mango trees reach into the sky, and a garden grows, all in front of the Soi river that marks the most western point of the property. The background music of each class are the raucous roosters (a sound made slightly less irritating when they are imagines as the ancestor of the T-Rex), cracking coconuts, and a bubbling brook.

Beyond the lower classroom is, subjectively speaking, the most important room in the entire complex – the kitchen. As you walk through the room nostrils fill with the aroma of chilli, stir-fried vegetables, tofu and, without fail, the fresh and warm smell of cooking rice. Two gas stoves are supplemented by two wooden burning stoves that smoke for hours as bamboo shoots boil away in large pots. Counters run the length of the far wall where finished meals sit in preparation for hungry mouths. All things considered, the student chefs are gracious and have provided us with a wonderful array of meals which always leave us wanting more. They are doing better than the best they can with what they have, and for that I am super grateful.

Stepping down and out of the kitchen you will find the dishwashing sink and a basin of well water. To the left there are two bathrooms, one with an ominous squat potty and other with a common latrine. During the rainy season the river water, the usual washing place for the students and clothing is filled with wash off and/or is dangerously breaking its banks, so it is in the bathroom with the latrine that a bucket of clean well water is filled to be used for bathing. In the hot and humid weather, it is only ever the first dump of water that shocks the system; it is a refreshing activity to bookend a long and sweaty day.

There is more than just human habitation that makes up the site. The chickens are for eggs and for eating, the cats and dogs occupy the next position in the food chain mostly eating scraps and for felines a lizard or two who eat and keep the bug population under control. There are plants that grow in part due to human cultivation as well, like the bitter melon, the chilli bush, and the bamboo used for building and for eating.

Beyond what humans can control for grow all sorts of tropical plants the names of which would take the reminder of the word count to name, and a number of trees home to the fowls of the air, towering above the beasts of the field. Jackfruit, a large, green fruit with a spikey shell, grow from the trunks of their trees, with seeds surrounded by a sweet and aromatic meat similar to the anatomy of a pomegranate (albeit the jackfruit is 10 times larger). Banana trees, for those who have never seen them grow before may come as a surprise, but somehow underwhelming because of their commonplace in supermarkets around the world. On the other hand, the mangoes ripen at the end of the hot season in June-July, and their sweet, tender meat taste is a luxury considering their premium price in non-topical regions. The most dangerous is the palm tree, specifically the coconut palm that grow along the banks of the river. These murderous trees kill more people in a year with their falling drupes than sharks kill each year. Every pass under the coconut tree is a death wish – an emergency plan in the case of the sound of a falling death stone is recommended (make yourself small and cover your head has been my strategy to date). Hyperboles aside the nutritious water and nutty taste of the coconut is well worth the low risk of concussion.

At the far end of the site a life giving sound can be heard; the last stop on the tour is a sound that fills the heart with fulness and energy as the source makes its way under the trees that cover its banks. The Soi River whose depth fluctuates with the changing seasons moves past the campus leaving the surrounding soil soaked with its source of life. This stream will travel for a few more kilometres before joining the waters of the Pai river a tributary of one of the smaller river systems in Asia. Children play in the Soi’s channels, bodies and clothing are washed in its flowing waters, and unsuspecting fish and frogs are speared or caught in its pools. The community is oriented around its waters; from out of the waters of this river, life flourishes.

Hi, my name is Rowan. As of June 1st I will have completed the coursework for my Bachelor's Degree in Political Science. The very next day, June 2nd, I will be heading off to Northwest Thailand to teach English with the Karenni people. I am absolutely stoked for this upcoming experience! Please follow along to track my adventure.