Charlotte Clar – Blog 2: All in a Day’s Work 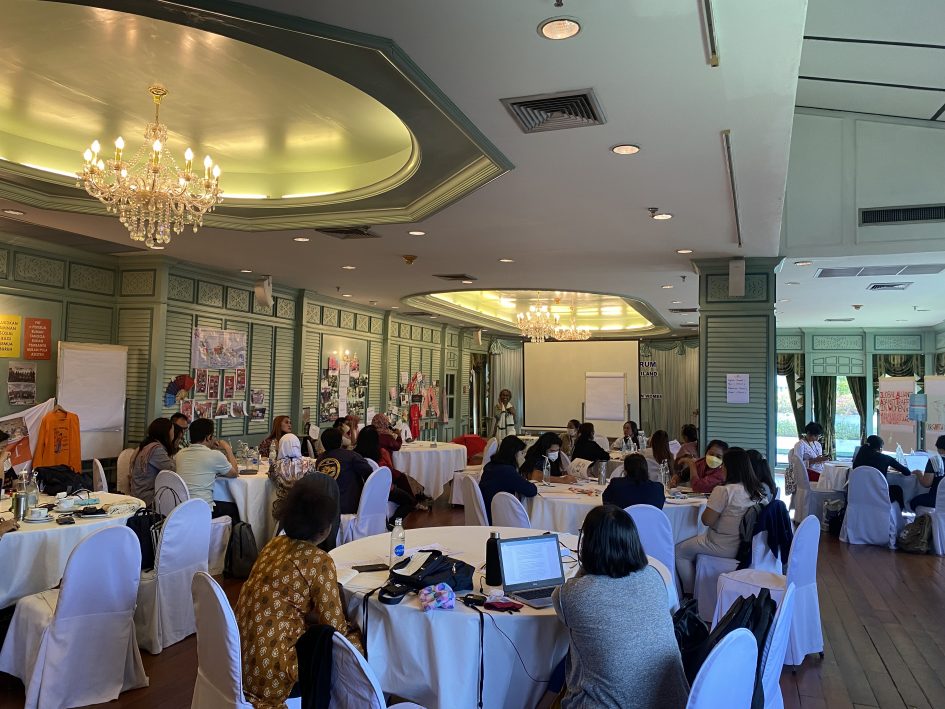 This month I had the real honour of being involved with the Women Workers Forum. This was a new idea developed by GAATW back in August 2021. The secretariat wanted to bring groups of women workers together to help support their agendas and goals for the futures of their sectors. Fast forward to July 2022, the first in person meeting happened. Around 40 participants from three different countries and nine organizations came to Bangkok to share and learn from one another. Unlike many NGO conferences this was not about the higher ups of the organizations coming to make decisions on behalf of their teams, but rather the workers themselves coming to discuss their work, their stories, their struggles, and their triumphs.

The incredible participants were…

From Thailand there were two organisations, Essan Community Foundation (ECF), with representatives from Maha Sarakham and Surin Provinces and HomeNet Thailand. ECF works to improve the lives of women farmers in Isaan who deal with chemicals that are dangerous to their health in their day to day work and at a higher percentage than men. HomeNet is an organization for Domestic Workers in Thailand who are trying to improve several aspects of Domestic Workers’ lives including access to social services, healthcare coverage, pensions as well as work and train these workers to be advocates and leaders in their own communities.

From Cambodia there was the United Sisterhood Alliance (US), a network alliance of four members including Women’s Network for Unity, Worker’s Information Center, Social Action for Community and Development, of which the fourth, Messenger Band had some members present. US works with garment workers and sex workers to advocate and campaign for better laws, services, and protections for these workers.

From Indonesia there were also three organizations, Jala-PRT, Organisasi Pekerja Seluruh Indonesia (OPSI), and Yasanti. Jala-PRT is an organization of Domestic Workers working in a variety of ways for the protection and rights of Domestic Workers in legal legislation and a variety of social programs. Yasanti is working for more rights and recognition for homebased workers and informal workers, including women market porters. OPSI is an organization focused on the recognition, protection, and destigmatization of sex workers and sex work.

The conference was filled with lectures, sharing, participation, learning, dancing, craft making, and bonding, but my favourite part was when the women got to share and speak themselves. Most participants did not speak English, at least not at a fluent enough level that they felt comfortable expressing and sharing what they wanted to say; they understood much more than they could express. Therefore, the translators that had come spoke into a mic and then everyone listened to a headset in the language of their choosing. For example, if a woman from Indonesia was speaking she would talk into the microphone, then an Indonesian translator would be speaking into the headset mic in English which the Thai and Khmer translators would listen to and then translate into their respective languages. This whole ordeal set the pace for the conference at a slow pace where listening became of the utmost importance.

When the women shared about their organizations, their reasons for joining, the importance of documenting their work, and their stories, I couldn’t help but get a bit emotional. It was very impactful to hear their personal stories and really realize how much work women do every single day, of which not all of it is paid, and how important it is for these women to leave behind a better world for the generation after them.

One of the activities during the conference was about documentation and practicing documentation; how are these organizations going to remember their activities?

As an aspiring historian I was really glad this question was asked and documentation was taken so seriously by all organizations and participants. One of the most frustrating things about being interested in women’s history is that for the majority of the time, no one cared about women’s lives, their labour, their thoughts, their problems, their triumphs, and so no one wrote it down. Obviously women were present throughout all of history, but it’s like there is a ghost next to all these men. Perhaps their names are mentioned, maybe even their father’s name, but the further back you look and the lower of societal class, the less information was recorded and remains. Having these organizations invest in creating primary documents of women’s stories was so inspiring to hear and I hope future historians will really find it useful.

Additionally, one of my roles during the conference was to take notes and I’d like to share something I copied almost word for word from a female farmer in Isaan who is a part of the Essan Community Foundation. As a part of her documentation practice she was interviewed by another member of her organization. Another participant asked her “How do you feel after being interviewed and watching your interview?” And this is what she responded:

Emotional because I am a woman. They do the housework and then they go to work to earn money. Why do we [women] have such a difficult life? Taking a risk everyday with the chemicals (in the farming) and taking all this danger to earn a livelihood and send our children to school.

Deep empathy for myself because we have to endure this difficult life. How come I’m the one that has to do all this [work]? Whis is it all women’s work and why can’t men do it too? When I’m telling this story I want to raise awareness to men so they share this burden. These responsibilities must be shared with men.

One of the main takeaways for me was that while women’s labour is pivotal to the very foundation of society, it does not earn the respect it deserves and that these women work incredibly hard.

It also makes me think of the women in my own life and all the unpaid work they’ve done in addition to having their own careers. Raising their children, caring for their elderly parents or other family members, volunteering and participating in their communities, being life partners to their spouses, and looking after the majority of the maintenance of the household.

The Women Workers Forum gave me so much knowledge, so much to think about, and I am so grateful for this opportunity to live and work in Bangkok where I can have these experiences.

In between all the discussions we got to do some unique fun activities. On the left is “Tung” a craft from Thailand, also known as “God’s Eye” to some English speakers. On the right is learning a traditional Indonesia line dance at the celebration dinner.

That’s all for now! Until next time,

Hello! My name is Charlotte Clar and I have just finished the coursework of my Bachelor's Degree at UVic. I did a major in History and Minor in Professional Communications. I will be living in Bangkok, Thailand for 6 months working at GAATW, the Global Alliance Against Traffic in Women. I'm excited to be writing this blog and sharing my experiences from my first time in South East Asia!