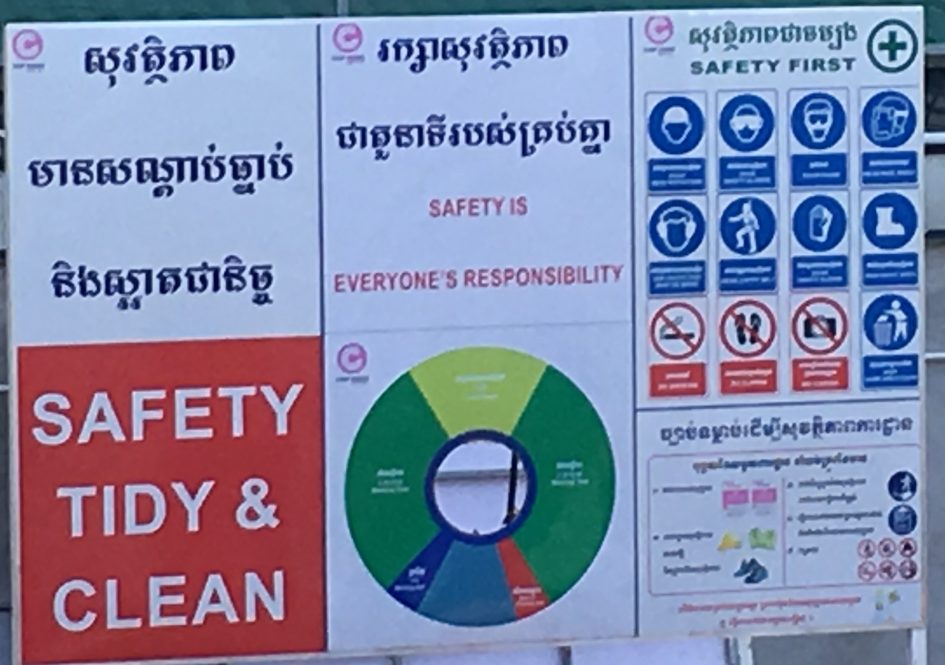 Today is a warm, summer day in Victoria. Looking out my room’s window, small birds sometimes fly from one tree branch to another, making chirping noises. It is a calm environment to review and reflect on my fieldwork in Cambodia from several months ago. And I wonder how my interviewees have been doing since our last chats and during this strange time. If staying at home would be a luxury – too costly to afford as they’d once told me, my guess would be, my interviewees would still now be busy hammering nails, laying bricks, going around ensuring that working conditions for workers were safe, in the obstreperous construction sites.

It was around 11 am in Phnom Penh, at the other side of a busy street of where I was standing under the scorching sun, the gate to the construction site was then flung open, many workers hastily walked out of the construction site to get their well-deserved lunch and a short rest within the next one to two hours. I stood still as they were walking past me and did not dare to ask them for an interview.

But I was lucky – a trade union helped me to meet workers. As we were walking towards the workers’ accommodation, my fieldwork accompany was relaxed, but I was anxious to see many security guards and to enter a large construction place for the first time. As we were walking towards my interviewees, on my right side, there was a construction site safety sign with large letters and pictures, saying: “safety first”! The site safety signs then became something that I tried to locate each time I walked past a construction site, at least for the rest of my fieldwork (photo below).

We went to another construction site the next day. Its main gate was locked when we arrived. The construction foreman whom I was supposed to interview, did not hold the key but told us from inside the gate that it would take a long walk to go through a different gate– and suggested that we go through the small crack at the gate. I asked my fieldwork accompany: “are we really going through this way?” (photo below). She said: “we could try”.

During fieldwork, even Google Map sometimes tested my sense of directions by sending me to wrong addresses. So my interviewee went to pick me up from where I got lost. But once the interviews started, I was intrigued by their responses. They were also amused by the seemingly simple questions: instead of being asked about technical work such as how to put up a construction structure, they were asked about their perceptions, how they think about things, religions, and other social facts. A foreman said to me “after you interview my co-worker, interview me, too – I also want to share my thoughts.” They also decided to introduce me to more people to interview. Not only giving me food for thought, some of my interviewees even offered to share their food when the interviews were conducted around meal time.

I was on the phone to thank one of my fieldwork accompanies again as I was about to board the flight, taking a break to ingest the fieldwork. Her question then was “would you later remember this fieldwork experience?” – a question that left the PhD student emotional and trying to search for the right answer: were the once-presumably challenges really challenges and difficulties? Could that even be compared to the time, patience, kindness, and inputs my interviewees gave me and to enlighten me a bit more? – Clearly not!

Ratana Ly is an incoming scholar from Cambodia completing her PhD in Law at the University of Victoria through CAPI’s “Regulating globalization in South and Southeast Asia” project, which has the goal of “activating a dynamic community of young global leaders around the world to conduct interdisciplinary research on innovative governance and justice strategies to mitigate the harsher effects of economic globalization in South and Southeast Asia.”