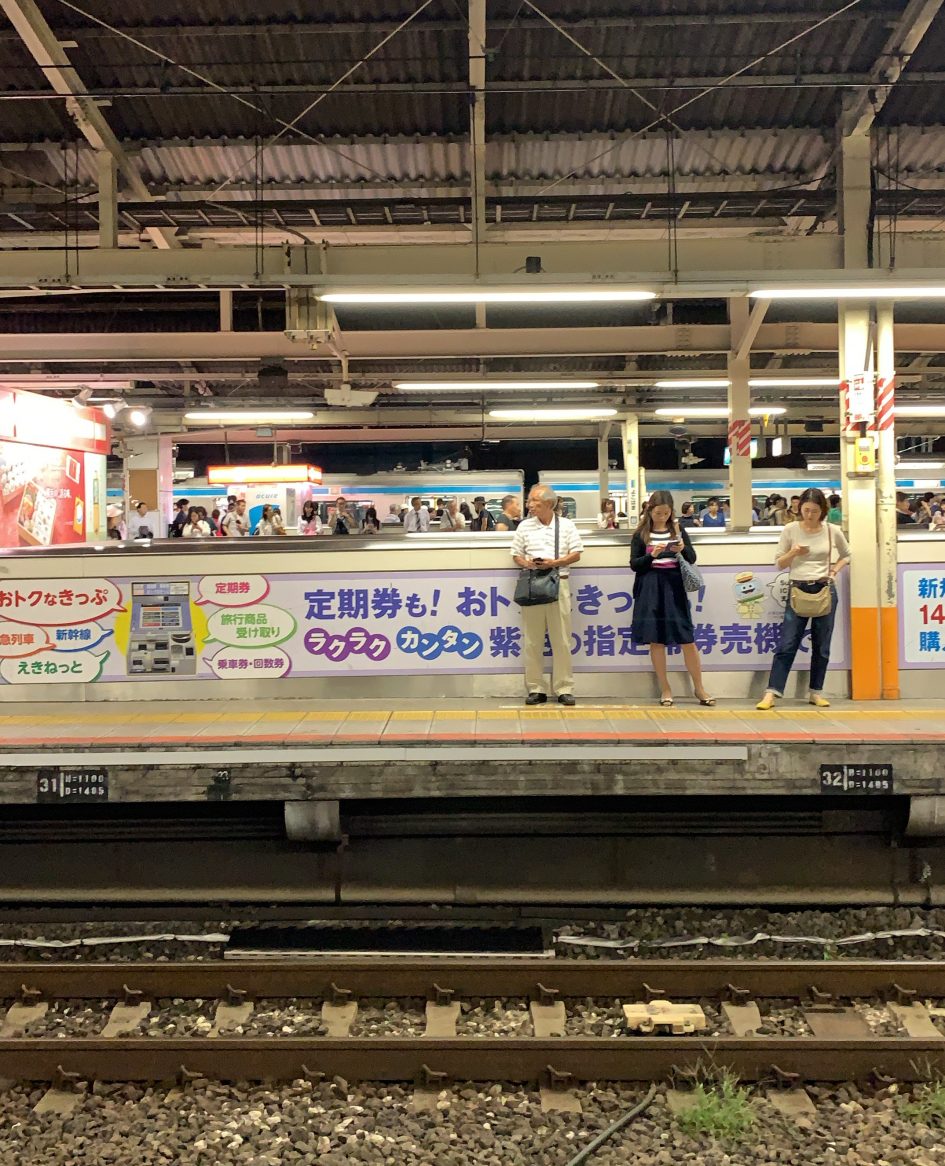 After watching the rest of my CAPI intern cohort be in the field for four months, I finally touched down at Tokyo Narita Airport on August 25, ready to take up the reins and begin my internship with CITYNET Yokohama Project Office.

For my first month in a new country, in a new continent, filled with new culture and language, I’ve got to say—my transition from Victoria to Yokohama has gone significantly smoothly. A large part of this was the presence of fellow intern Erin for my first two weeks, who generously guided me to the grocery store, helped me buy a SIM card, traipsed to and from my first day of work with me so I wouldn’t get lost, and introduced me to her lovely group of friends.

So much has happened in my short time here, and I’ve already carved out a little piece of home over here on the other side of the ocean.

The Privilege of Disaster Resilience

My second week was the whirlwind of CITYNET’s annual Disaster Cluster Seminar, and Erin and I ran around conducting interviews and ensuring each presenter had their presentation slides and stuck to their time limit. In this three-day seminar, I learned more about natural hazards and urban resilience than I had in any of my geography classes at UVic, and realized just how unprepared Victoria is for “The Big One” (and disasters in general).

In their presentations, seminar participants detailed challenges their cities face, many of them representing cities of the Global South, and the ways they were working through and around these challenges to provide their citizens with successful disaster prevention and response, from typhoons and flooding to earthquakes and fires.

My newfound knowledge of disaster response was tested that following weekend, with the passage of Typhoon Faxai, a Category 4 storm that hit Yokohama and the Greater Tokyo Area full-force the evening of Sunday, September 8. That night, I was awoken multiple times as 180 km/h winds loudly whipped rain against my windows and my phone alarmed—scaring me half to death—issuing an emergency landslide warning and evacuation notice for parts of my city ward.

This left me with a terrible nights’ sleep, yet I got to relax that day as the office was closed due to train cancellations and disruptions. I was gladly granted mercy against the chaos that ensued at the train stations as millions of people tried to make it into work that morning amidst cancellations and delays.

The seriousness of the typhoon largely left myself and the cities unscathed, except for those in Chiba Prefecture, which was hit the hardest, who were without power for days after the storm and thus without water or air conditioning in the intense heat that followed. While my life continued largely uninterrupted, I wonder how many of the cities from Global South countries that attended the DCS would have fared in that storm.

Japan has immaculate disaster preparedness—largely because they have the funds to invest in it. Their infrastructure is built to withstand floods and typhoons, most buildings fire-retardant and earthquake-proof with strict codes calling for quality materials, and they have early-warning systems and each citizen a phone to receive them.

In comparison, Kathmandu, Nepal, has three firetrucks for a city of one million people. Dhaka, Bangladesh, has floods that displace thousands of people and roads that submerge and impede first-responders. Tuguegarao, the Philippines, had to mobilize the entire community with little funds to build back after the devastation left by Typhoon Ompong in 2018.

In Canada, disaster never even crosses my mind. In Vancouver and Victoria we have rain, but rarely enough to cause serious flooding. We’re in an earthquake zone, but don’t experience enough to make it seem like a real threat. When we need help, we can call 9-1-1 and have a firetruck there within minutes. We are so lucky and so privileged, to live somewhere that one thunderstorm usually doesn’t mean we lose everything—our loved ones, our jobs, the roofs over our heads.

Aside from the excitement of the typhoon, my life in Japan has already become pretty routine. Each morning I eat my cereal and sip my instant coffee and download podcasts to listen to on the way to work. I count down the minutes until I can get on the air-conditioned train cars when it’s 30°C at 8:30 AM. On the train, I sing along to the little jingle of each station. The barista at Starbucks near my office laughs along with me as I practice ordering my iced latte in Japanese. And finally, I greet my colleagues each morning before settling down for the day.

Many things that were once unusual about Japan have now become normal to me—like how everyone quietly lines up for trains and escalators and how someone always holds the “open door” button on the elevator even though there’s really no need to.

Each person is so kind here. I am again and again astounded by how kindly and respectfully I am treated in Japan—even by people who don’t know me and by people I can’t even communicate with.

My one month mark in Japan was commemorated by an extremely high fever and a trip to the emergency room, and again I was taken aback by the kindness of those around me. Namely, one of my coworkers, who interrupted her long weekend to accompany me to the hospital and be my translator and support, and then a colleague of hers in the Yokohama Fire Department who had heard about my situation and stopped by to give me a Gatorade-like drink, snacks, and a ride home. The kindness of my coworker made something that, without her, would have been so terrifying for me so much easier, and soothed much of my anxiety over the event.

The kindness and politeness of people here is maybe the most noticeable difference to me between Japan and Canada. While yes, of course, people in Canada are also kind, it feels different here. It’s hard to put exactly into words, but in each of my interactions, I feel as though the other person genuinely wants to help make my day better by being polite, kind, and respectful.

It’s a Small World After All

This month-and-a-bit in Japan has shown me things about myself: that I’m versatile, adaptable, and can conquer my fears. I can thrive on my own in a new environment and can depend on myself. And, maybe most importantly, I can ask for help when I need it. Compared to my last time living abroad, I feel secure only one month in.

Each place I travel, each person I meet, somehow the world gets both smaller and bigger simultaneously. From home, in Canada, the world seems so big, with so many places and people in it. Yet when I travel abroad, with each place I go, I realize the world isn’t that different, whether you’re in Amsterdam or Vancouver or Tokyo. While there may be differences in culture and language and way of life, I find myself seeing more similarities than differences.

I guarantee you right now, at this very moment, there are a couple of elderly men sitting on a terrace in Italy, people-watching and drinking a cappuccino, while another pair of elderly men in Vietnam sit and watch the world go by, sipping their cà phê đá and chatting about life, and then a third set in Colombia doing just the same. I can barely wrap my mind around how amazing this world is and how similar, yet so different, we all are. It’s wonderful and exciting and magical to imagine the whole world filled with people who are so different from me, yet somehow just the same at the core.

It may just be my way of seeing the world, but each place I travel to and each city I live in, I can’t help but notice all the millions of ways we are all alike, all the ways we show how we’re the same, all the ways that we’re human. The notion is overwhelming and romantic and fills me with joy, dreaming of all the places in the world and all the people in it, thinking just how truly small, yet truly massive this wonderful, wonderful world is.

Hello! I'm Meghan, currently interning with CITYNET Yokohama Project Office in Yokohama, Japan. I've recently completed my undergrad degree in Geography and Professional Communications at UVic. My passions lie in urban and international development, sustainable cities, and how these are communicated and effected through various media! I love to travel and be immersed in unfamiliar cultures and am looking forward to not just experiencing Japan, but also contributing to CITYNET and the causes they work towards. I'm so excited and grateful to be a CAPI Intern, and what better way of sharing my excitement with you than by sharing my experiences here on this blog.