Kaylin Arason – Blog 2: Adapting to Find Comfort in the Discomfort 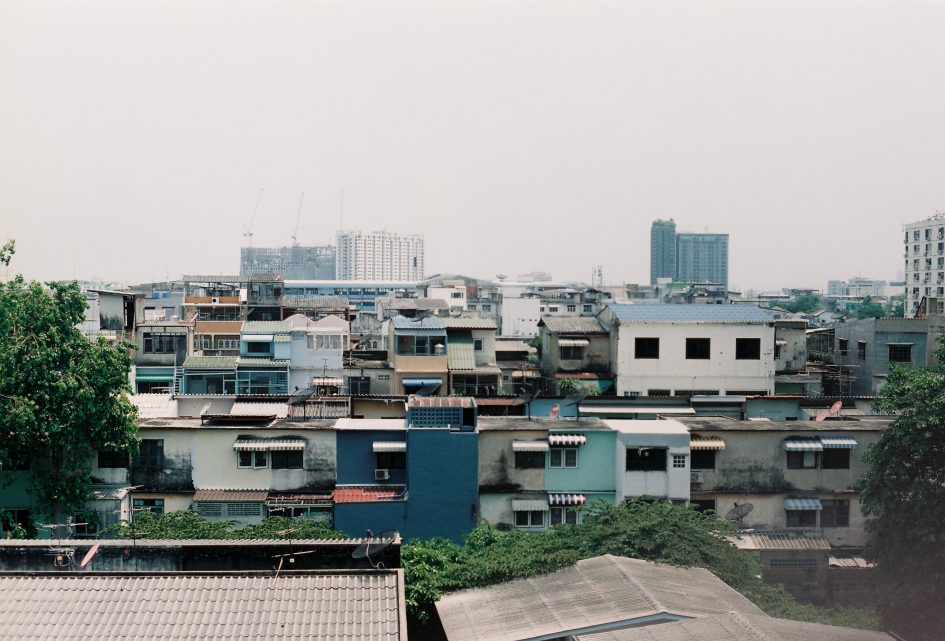 The view that I see leaving my apartment every day! I'm in awe.

On May 6th, I was sitting in my Mother’s living room watching the Bangkok episode of Netflix’s “Street Food” and drooling over all the nomz that would soon grace my tastebuds. With a month full of exams, vaccinations, and packing up my belongings in the city that had stolen my heart after four years, I hadn’t had a lot of time to prepare myself for the uncertainty waiting for me at the Bangkok terminal. Let me tell you, my peeps: it’s impossible to prepare yourself for moving (albeit temporarily) to a new and unfamiliar place.

Stepping off the plane and onto Thai soil, I immediately felt my skin suffocated by the humid air. The feeling is unexplainable, but the air encompasses you (I have actually grown to love it). This feeling only lasted a few seconds until I was greeted by the airport A/C, bringing me a sense of ease at 12am after a long 20 hour journey. It was hard to fathom that less than 48 hours prior I was in the warmth of my mother’s living room, fascinated by the hustle, bustle, and liveliness of Bangkok’s street food scene through her TV screen. Now I had been “plopped” there, released into the unknown like a ship unto the sea. The images on the TV screen had become my new home.

I like to think that humans are products of our environment. For four years, I was immersed in a singular space: I breathed Victoria’s air, walked on its soil, and sometimes the wind would play with my hair or the ocean would give me a refreshing spray, as if it knew that the Victorian sun was a little hotter than usual. This place became part of my identity, and so did my beautiful friends, morning yoga at my favourite yoga studio, and a post-yoga soy matcha from my favourite cafe on a familiar corner. My life had been steeped in routine, familiarity, and comfort, and being stripped of that has proven to be one of the biggest challenges I have ever confronted, but it’s also a privilege.

1997 was the year that I was released from my mother’s womb: a little human ready to take on a very big and scary world. A blank slate, yearning to learn and to soak in everything around her—to become. 21 years of becoming and you would think that I would know how to be a human. But being a human in a new space is very different from being a human in a familiar space. Daily rituals, once mindless and effortless, things like ordering a meal, buying a train ticket, even crossing the street, became challenges. Flashback to the ball of chub I was in 1997. I am just as unknowing, but no longer a blank slate. Rather, I’m the product of 21 years of splashes of colour to the canvas—a coalescence of experiences and lessons learned. Now, I’m adapting. But how do I adapt when it seems like there is minimal white space left on my canvas? Do I get a new canvas, erase some of the dried up paint, or paint over it? I unlearn, and learn again.

The biggest challenge to embracing all the new colours, coming in unfamiliar shades, consistencies, and even smells, is the resistance. Resistance is the easiest path, but it’s also where the least amount of growth happens. There’s a security guard outside of my building, and every day he greets me and says things to me in Thai. For the first few days I would look at him in confusion, expressing that I couldn’t understand. But every day it was the same. He would wave, smile, and talk to me in Thai until I walked away. I started to feel so much frustration being unable to effectively communicate. But at some point a switch flipped, and I learned to let go of those feelings of frustration. I surrendered to the unknowing and the confusion, and the outcome was beautiful. On day 3, the reality that I just could not understand him became so comical. I smiled about it, and the smile became laughter, and I started laughing so uncontrollably on my way to the train station that I captured a few stares (but what’s new?) from people on their motorcycles driving by. It was then that I realized the value of laughing at myself amidst all the confusion, misunderstanding, and discomfort. Learning to adapt for me has been about flowing with all the unfamiliarity, while still finding joy in the familiar, like the smile of the woman who cooks me my lunch every day (with so! much! love!), or the sound of the spoon clinking against the glass as the man near my office stirs my Thai milk tea in the morning.

On one of my first few days here, I was feeling very anxious. I ended up at a park in the middle of the city (Lumphini Park) which has become one of my favourite places to frequent. I remember entering the park and feeling a sense of calmness wash over me. Despite the park being in the middle of the city, the surrounding trees hush the nearby noises of motorcycles, busses, and trains. The contrast between these urban and natural environments is so stark. Men play Chinese checkers, and people of all ages giggle as they feed the fish and the pigeons, but beyond the comfort of the trees are towering skyscrapers. Still, it’s incredible to me how much life flourishes in this space—one of the only green spaces in the city—and also how the creatures have adapted to this peri-urban lifestyle. I wonder if they’re just as rattled by the noises of motorcycles in the distance? Perhaps these creatures, despite their ancestors having grown in completely “natural” environments, are more adapted to this city than I am. These various life forms (shoutout to the water monitors!), I included, are in constant processes of adaptation and re-adaptation, navigating the unnatural and the natural, the familiar and the unfamiliar.

I am here in Bangkok interning with the International Secretariat of the Global Alliance Against Traffic in Women (GAATW), an international NGO network that pursues a human rights based approach to combat all forms of labour exploitation. Right now, some of the projects I’ve been working on have been focused on the labour exploitation that women migrant workers face working in domestic and garment sectors overseas. I am so lucky to be learning from all the brilliant minds in the office, and also lucky to play a small part in some of their ongoing projects. Here’s what I’ve been up to:

Reading and writing about the challenges that migrant women face can be disheartening, but it also highlights the resilience they embody. These women are also in constant processes of adaptation, adapting to new work environments, cultures, and lifestyles in their countries of destination. Their migration is driven by poverty and unemployment, outcomes of political and economic systems which have created a small class of elites sitting on piles of wealth, earned on the backs of marginalized sectors of society. But these women are also agents of their livelihoods and independence, adapting to particular conditions and finding ways to support their families within this exploitative system.

Reflecting on these processes of adaptation that we’re all undergoing—me, the women I read about, and the critters at my favourite park—I am reminded of common experiences that might bridge a gap between us. But knowing that these processes of adaptation differ so vastly also reminds me of how much of a privilege it is for me to be here, to change, to adapt, and to grow. More on navigating privilege in a future blog post. This one’s quite long already!

Thanks for reading, my peeps!

Sending patience, strength, and virtual hugs to you all.

Hello! Nice to meet you! My name is Kaylin and I am pursuing a double major in gender studies and political science. I will be interning with the Global Alliance Against Traffic in Women (GAATW) in Bangkok, an organization dedicated to the rights of migrant labourers all around the world. Wee! This blog is a snapshot of my journey, as well as a collection of highlights and reflections on my experiences. Thank you for reading!