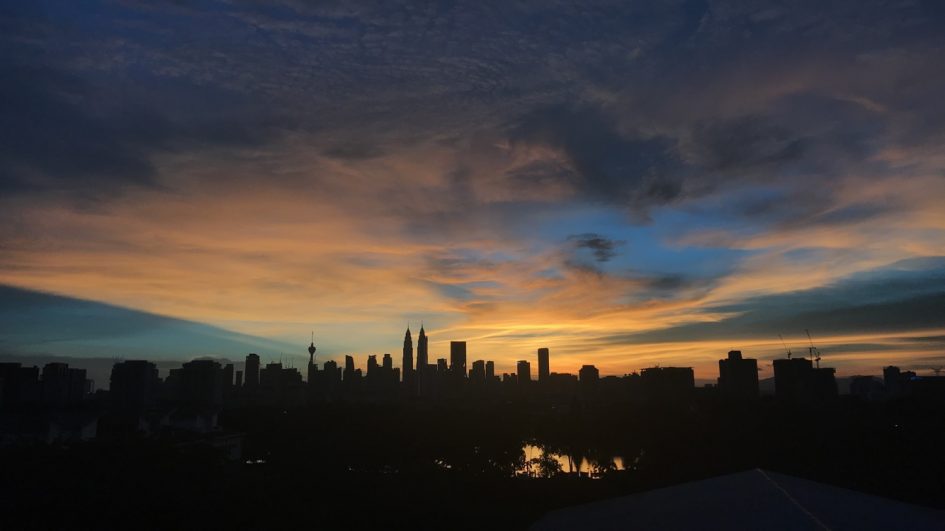 I have been living in Malaysia for three weeks now! The other two girls from UVic, Hayley and Tracy, and I have found and settled into a modest three bedroom apartment. Our apartment has a gorgeous view overlooking downtown Kuala Lumpur (KL) from across the way. The sun sets behind the skyline each evening, leaving us with a gorgeous show of oranges, reds and pinks.

A few days after we arrived, Ramadan began. Ramadan is an Islamic holy month of fasting. Muslim people fast from sun up to sun down and refrain from other activities such as smoking. Ramadan is four weeks long lasting a whole lunar cycle. If you want to learn more, I recommend looking at this information sheet: https://ing.org/ramadan-information-sheet/. Coming at this time has been eye opening and I have learnt a great deal about Ramadan and Islamic traditions.

Two weeks ago, I started my work as an intern at the Malaysian Social Research Institute (MSRI) in KL. MSRI provides services such as education and healthcare, and empowerment opportunities to refugees and asylum seekers in Malaysia. I have been given the opportunity to work in the office, helping with administrative tasks and social media, as well as to work in the school, helping invigilate exams and interviews with more diverse work to come after the students come back from a school break mid-June.

In Kuala Lumpur we have explored markets, food places, and thrift stores. We did a weekend trip up to Penang, an island on the west coast of Malaysia. We also went up to the Cameron Highlands to do some hiking as well as visit tea plantations last weekend. I am so excited to see many places and have many cultural experiences while in Malaysia.

Now, you’re probably wondering about the title of this post. Well, last week an army of ants marched across my bedroom floor. I followed them with my eyes to see where they were coming from, and came to the realization they are living in my air conditioner. Usually I am fine with bugs. I’ve always been the one who is called by friends, family and roommates, to come and capture a bug and put it outside. But I have recently come to realize when critters reside in my own living space I am petrified. Outside, they are fine, I don’t even mind if I am sitting on the grass and ants crawl onto my skin. But when there’s a possibility they could crawl onto me in my own bedroom, I am terrified! Due to my fears, I sadly killed the ants who were out marching and sprayed bug spray near the air conditioning so they wouldn’t come out into my room again. Since then, the children’s song “The Ants Go Marching” has been stuck in my head, probably as my payback for killing the ants.

Killing the ants has also had unintended consequences. Over the past few weeks I thought a bird was living outside of one of my windows chirping early in the morning. I would always tell Hayley and Tracy about it, and listen for the same call when we were walking around KL. Then, the other night I saw a little gecko come out from the curtain above my window seat. I had not noticed him before, but I had seen gecko poop near my windows, but had assumed it was old since I had not seen him. A little while later I heard a loud chirp before I went to bed and it suddenly hit me that a bird wasn’t living outside of my window chirping, a gecko was chirping in my room some mornings! That night that he chirped while I was still awake he showed himself to me multiple times, scurrying around the walls in my room. I thought he had just got comfortable with me, but I did some Googling and realized he was likely chirping and scurrying around so much because he was hungry. I had deprived him of his food source; ants! I feel bad about ridding this guy of his primary food source, so now I open my window more so bugs fly in so he has something to eat. I also moved the plant I have in my room to near where he hangs out, so if there are any bugs there, he can eat them. This whole process reminded me to think about the possible consequences of my actions; sometimes there are unforeseen consequences, especially when you do something out of fear or only thinking with a short-term perspective.

Now, this brings me to one of my favourite things: SUSTAINABILITY. My personal definition of sustainability is giving up as much as I can in order to promote more life and having a long-term perspective. Since I have been here, Hayley, Tracy, and I have tried to use as little plastic as possible. Single-use plastics are used a lot here, as everywhere else in the world, and it has been more prevalent since we eat out for many of our meals since eating out is almost the same price as cooking at home. We try to always have our own Tupperware containers, tote bags, and reusable straws on us to reduce our personal impacts. Also, around KL and the Cameron Highlands I have seen advertisements for stopping the use of plastic straws and plastic bags, seen sections called “EcoWatch” in the local newspaper, and have heard people talk about the problems with single use plastics on local radio stations, which makes me optimistic about our global future.

Hey! I'm Selina, and I recently finished my courses for my degree in Environmental Studies and Geography at UVic, with a concentration in Urban, Health, and Development Studies. I will be working with the Malaysia Social Research Institute (MSRI) in Kuala Lumpur. Keep reading to learn more about my educational adventures!