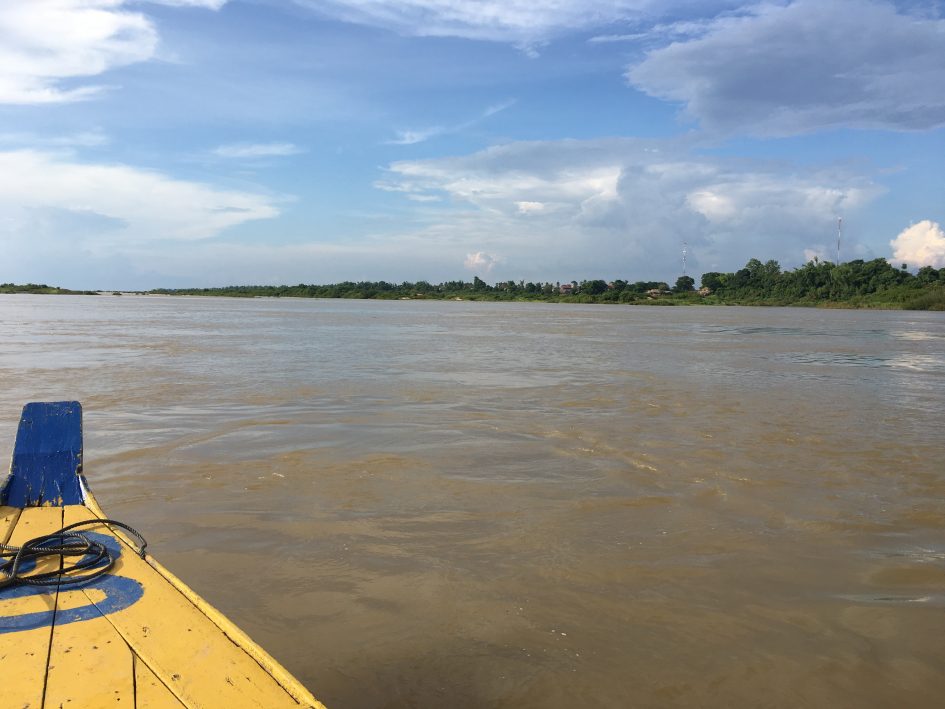 I revisited my spiritual beliefs during the fieldwork in Cambodia last summer.

Shortly before I took the bus alone from the capital to Kratie province to conduct the fieldwork, a friend attempted to amuse me with a “real” ghost tale. She vividly described how a ghost ordered her (in her dream) to get out of the hotel bed she was sleeping in. That nightmare woke her up in the middle of the night.  Unable to change room at such a late hour, my friend asked the ghost to let her sleep there for the night (of course, she spoke to herself as she did not see any ghost upon opening her eyes!). After making that request, she fell asleep without having more nightmares.  She also reminded me that one person must avoid staying in a hotel room with two beds because ghost would occupy the other empty bed.

Despite deceiving myself that ghosts did not exist, I did make sure that there would be only one bed in my room, when staying in an old family-owned hotel in Kratie.

The following day, I made a visit to a small village to interview locals there on flooding. One of the locals, however, told me about her encounter with spirit. She said that she was in great distress many years ago because her son had a bad injury and she could not afford to pay a medical doctor to treat him. She then visited a fortune-teller. The soul of her late father briefly occupied the body of that fortune teller to tell her the secrets to create “magic” ointment to treat her son’s wounds. She did what was told and claimed that ointment healed the wounds perfectly. She has been pious ever since. She said, however, that she had to avoid walking under the stairs and avoid eating certain vegetables if she wanted to retain such spiritual power.

After listening to her story, I was more conscious of my actions, which could, by accident, upset the spirits. For example, when I wanted to take a picture of a spirit altar, which had been built much higher above the ground, to resist the flood, I sought permission from the owner (human). But I also felt morally obliged to seek permission from the spirits, which lived in that altar. Of course, the spirit did not speak to me in person, but after asking quietly, I told myself that the spirit allowed it.

Back in the hotel that day, a staff there fed me with more stories about supernatural power. After I had a delicious dinner, a hotel staff kindly gave me an update of that day’s news.  She mentioned the mysterious case of missing boys in a cave in Thailand. She was convinced that praying to the spirit/God who guarded the cave, would help the search team to locate the boys quicker. She further added that, at one point, she was very sick, and a medical doctor could not diagnose her illness. She was then taken to a spiritual doctor, who told her to pray and seek forgiveness from “certain” spirits in order to heal. Following that advice, her illness disappeared.

That night I spent time thinking about and reflecting on the spiritual stories I heard during the day. Tik Tok Tik Tok, it was past midnight, and I found myself repeating the Dharma verses, my grandma had taught me: “Namo tersar Namo tersar …” (which translates to ‘I pray homage to the fully enlightened one’)  But then my pessimistic thoughts got the better of me – “Could Namo tersar really chase away bad spirits? Would Namo tersar work now?” I tried to recall other Dharma verses, but nothing came to mind, so I stayed awake until morning.

Finishing my fieldwork and returning home, however, I lost motivation to learn other Dharma verses beside “Namo tersar.” But I asked my grandmother to give me religious blessings anyways!