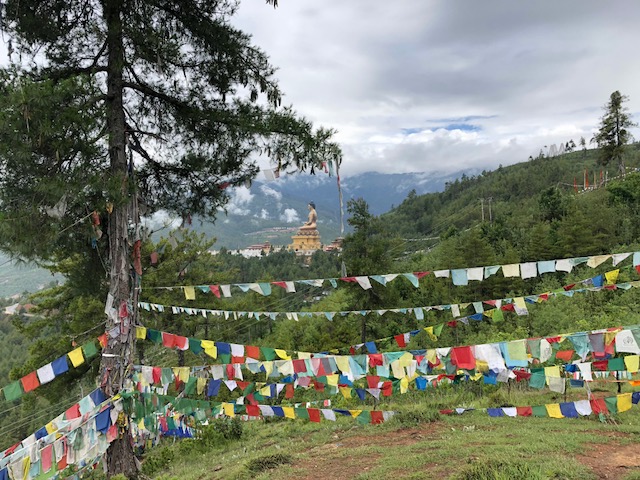 Texts, documents, and the written word have featured prominently in my conversations in Bhutan over the last three weeks. A comprehensive text on the laws of property would, for example, make the teaching and learning of property law easier in the country’s first law school. Authoritative texts on local property (and other) laws will likely also benefit lawyers and judges who until recently have received formal legal training almost entirely outside the country before completing a short program in national laws. New pieces of legislation continue to appear in the country. A preliminary reading of some statutes related to property indicates these combine existing legal principles and practices with newer ideas. Being interested in the history of the legal profession in the country, I’ve also been making enquiries about what archives exist here and what kinds of records they might hold. Responses to that specific inquiry remind me how important it is to first figure out the meaning of archives and how people relate to historical records in any place.

Texts also matter outside the academic context to those who see them as means for preserving knowledges that have traditionally been transmitted orally through generations. While there appears to be a general consensus that change is a good thing, there is some concern that as the young in the country begin to discover new ideas and employment opportunities, valuable knowledges associated with customary ways of being and traditional occupations might soon be lost unless written down and preserved for the future. Such anxieties are not unique to Bhutan, but these conversations serve as an invitation to think about the particular ways in which they emerge as a concern in the here and now.

How does one understand desire for the written word in a place where the most ubiquitous texts attain meaning in movement? 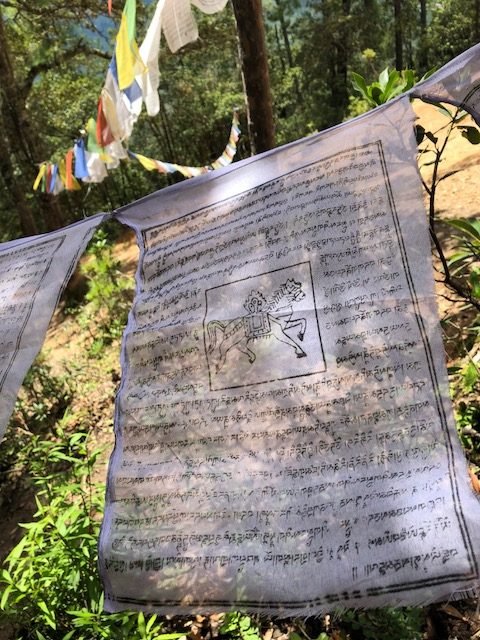 Neither the written word, nor documentary records are new to Bhutan. Texts related to spirituality, governance, healing, life and death preserved in dzongs, monasteries, and temples date back centuries. Going by the number and diverse range of books donated to the Bhutan Street Library project (an excellent initiative of JSW Law students), there appears to be a significant reading culture in Thimphu today. A typical Bhutanese person does not, however, first encounter the written word in the physical stillness of a book or scripture. A child born here first begins to see words in motion. Words on the lung ta (trans. ‘wind horse’) or the colourful flags that dot the landscape, fluttering in the wind, tied with strings or on poles, carrying messages to places where humans cannot reach. Words on mani dung khors and lakhors or the cylindrical prayer wheels that are meant to be turned. Prayer wheels outside temples and shrines are turned by people. There are hand-held portable ones that the elders turn as they go about their day releasing the words into the universe. Some are connected to streams, constantly turned by the flow of water making it possible for the universe to receive the messages the texts hold.

During a recent hike up to the Taktsang monastery in Paro, the wonderful Professor Kuenzang from JSW School of Law generously shared many stories about the flags and wheels, the significance of the different colours, messages the wind horse carries, and the beliefs associated with the practice of tying the flags and turning of the wheels. To be effective and meaningful, the words printed on flags and wheels need to move. It is the movement that activates the messages they carry. It is not possible to read the actual words while the flags flutter or the wheels spin. That doesn’t always matter though, because the words in fact acquire meaning and purpose only as they move. It is the movement, or the responsiveness of the text-bearing object that ultimately imbibes the words with meaning, or rather with meanings that matter to the people who tie, turn, or witness the moving texts. 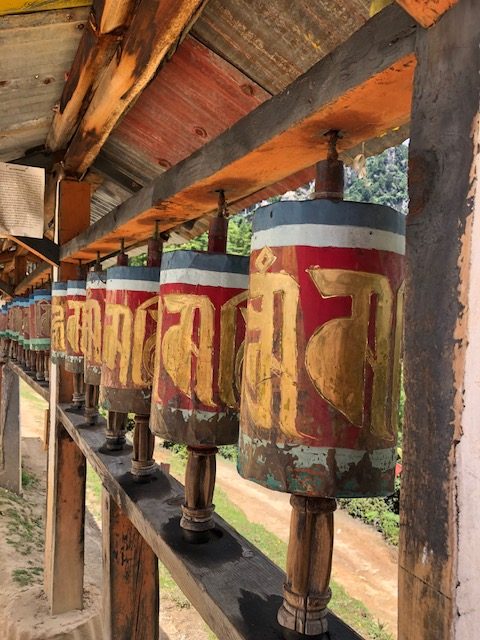 It is this meaning-in-movement that I find myself returning to after every conversation I have about texts here.

The flags and the wheels in Bhutan have got me thinking about the relationship between fixity and the mutability of law, its authority and its ability to respond. More specifically, I’m curious about how we might understand the authority of legal texts in a place where the most foundational experiences with texts are shaped not in fixity but through motion. An answer (or multiple answers) to this question could help think through other questions related to law, legal theory, and history. I list a few here primarily to set some thoughts and words in motion.

In what ways might constantly moving texts help rethink the purpose and significance of the written word in a place with strong oral traditions and culture? Do these texts open up spaces for understanding differently the relationship between oral history and written archival records? What do they tell us about the relevance of written historical records? How might we think about teaching and learning law through meaning-in-movement? What role does spirituality play in the learning/ teaching of law in contemporary Bhutan? I have been wondering what a legal text might in fact mean to a student whose earliest experiences are shaped by words in motion. 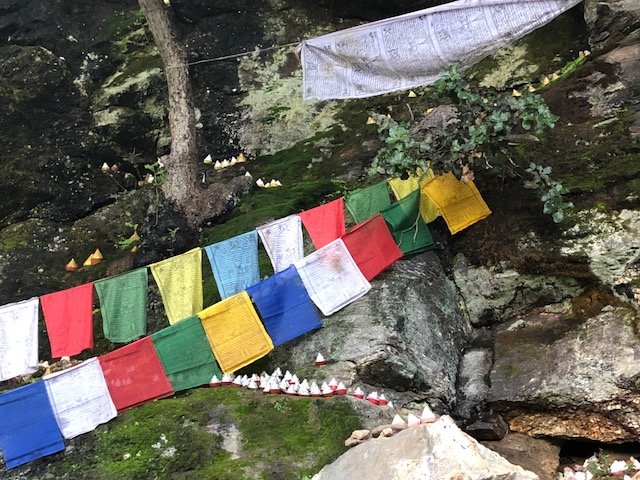 As I come across references to the need for ‘strong laws’ in print or conversations, I wonder what that might mean to one who comprehends effectiveness of texts primarily through responsiveness. Are there ways of understanding law-making and commitment to rule of law through the centrality of the everyday practices of turning the prayer wheel (always clockwise), and tying of flags (that fly/ flutter and change directions in accordance with the winds)? What might we learn from and with worldviews informed by these local practices in Bhutan about law, legal texts and archives more broadly in other places? In this context, I’ve found myself reflecting particularly on conversations about history, archives and the recovery and teaching of Indigenous laws in Canada.

My time here in Bhutan may not be enough to figure out all the answers, but I look forward to continuing conversations.

Dr. Pooja Parmar is an Assistant Professor at University of Victoria Faculty of Law. Her current teaching and research focus on the legal profession, lawyers’ ethics, legal history, Indigeneity, property, and international human rights law. Her book Indigeneity and Legal Pluralism in India: Claims, Histories, Meanings was published by Cambridge University Press in 2015.

During her time in Bhutan, Pooja will engage in collaborative research on property law and assist with the Bar Council of Bhutan. Her visit is part of CAPI’s “Regulating globalization in South and Southeast Asia” project, which has the goal of “activating a dynamic community of young global leaders around the world to conduct interdisciplinary research on innovative governance and justice strategies to mitigate the harsher effects of economic globalization in South and Southeast Asia.”