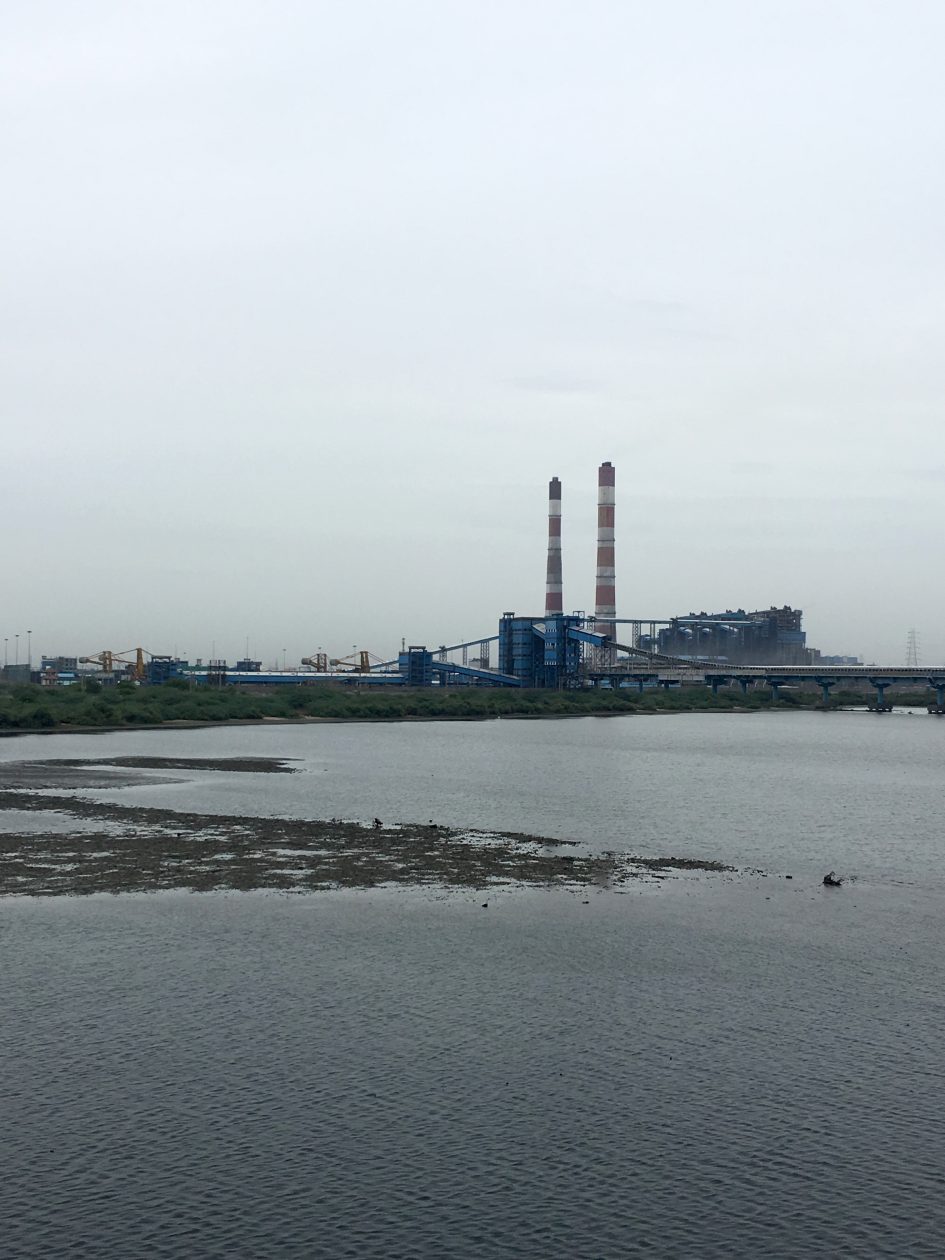 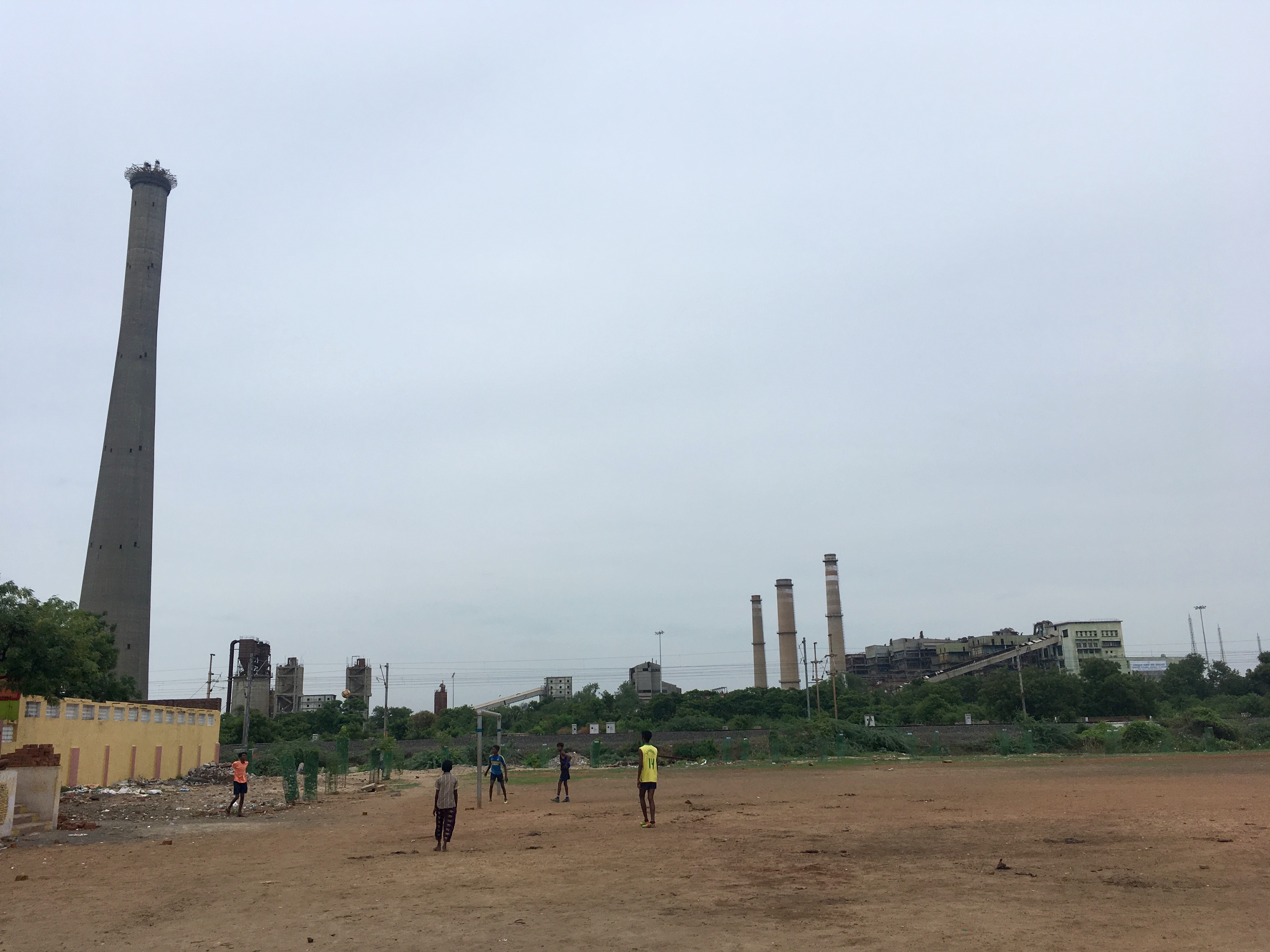 Children playing on a soccer field adjacent to a coal-burning thermal power plant in Ennore.  The three original stacks can be seen center right, with the taller, newly-constructed stack to the left.

Saturday, July 7, 2018.  Still half asleep at 5:30am, I fumbled around my room, grabbed my camera and water bottle, and wandered out to the street to meet Pooja, an environmental and social activist with the Coastal Resource Center in Chennai.  We wanted to get an early start to the day to avoid the inevitable heat that midday brings.  Even at 6:00am the temperature lingers near 30°C.  Pooja had offered to let me tag along on a tour of Ennore, a neighbourhood in northern Chennai.

Chennai, a city of 4.9 million people on the eastern coast of India in Tamil Nadu, has been my home for almost two months.  Although I’ve been reading about Ennore since the start of my internship, this tour would be the first time I ventured into the northern part of the city. While the word ‘tour’ may suggest a more light-hearted excursion, our trip to Ennore was far from a typical tourist outing.  The office has coined their route through northern Chennai as the “Toxic Tour”.

In the days of British occupation, the construction of an English fortress, Fort St. George, created a hub of trade activity, spurring settlement in what is now Chennai.  Fort St. George was originally referred to as “White Town”, while the urban native settlement to the north was called “Blacktown”.  This same settlement area to the north, historically poor and seemingly out of the public eye is now home to thermal power plants, fertilizer factories, refineries, and more. In an article by one of my supervisors, Ennore is referred to as an “industrial sacrifice zone”, which has allowed a high concentration of hazardous industries in an area where “the citizens’ right to life matters a little less than that of the major sections of society.”

Pooja and I caught an auto rickshaw north, to meet with Khulali, a Chennai-based lawyer, and two of her friends.  One of Khulali’s friends is writing a novel on flooding in Chennai and was interested in learning more about water sustainability and contamination in Ennore.  Together we drove north, watching as the landscape gradually changed.  One of the most immediate differences was the length of the beach.  Our office is located near Elliot’s beach, where a vast amount of sand stretches from the road to the tideline.  When I first arrived in Chennai, I remember being surprised at how far away the ocean was from the building along the coast. I was (happily) amazed that coastline had not been developed right up to the water.  In the event of a storm, this buffer would help mitigate what could be disastrous impacts.  For daily life in Chennai, this vast expanse of beach provided an area for the public to enjoy the coastline, with carnival booths, food stands, and plenty of space for sports.  As we drove north, this buffer zone disappeared.  As Pooja explained, the construction of the Chennai port had altered the way sand was deposited along the shoreline, with the port preventing currents from bringing sand north, causing sand to be deposited along Elliot’s Beach and Marina Beach to the south. 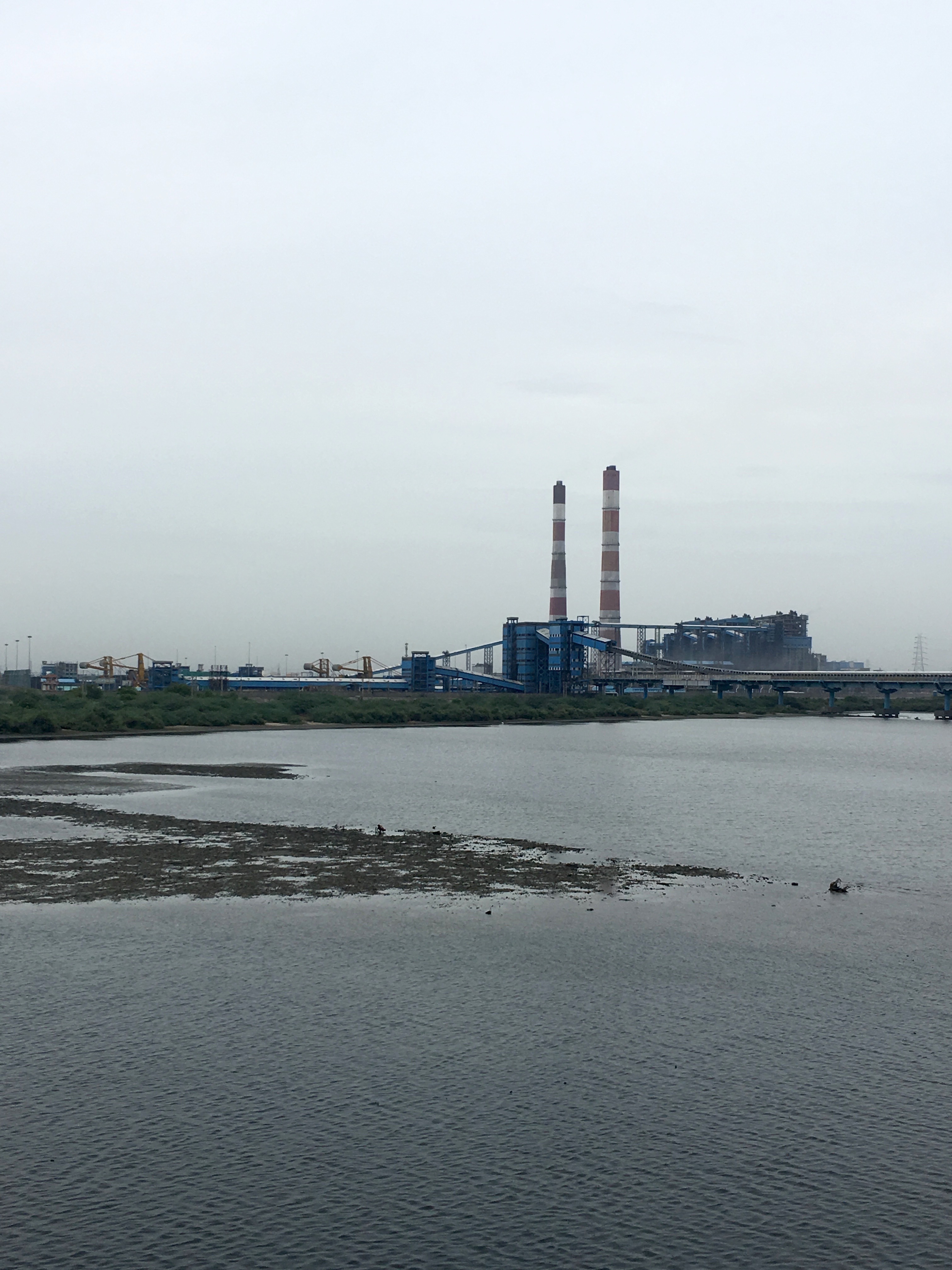 View of the Vallur Thermal Power Project from the Ennore Creek Flyover Bridge.

Having read about Pooja’s work on Ennore Creek, I knew that pollution in the area had severely compromised the livelihoods of traditional fisherfolk in the Ennore region.  The abundance and diversity of species within the creek have decreased and impacts on human health in the region are evident.  We continued north, pausing to walk along the Ennore Creek Flyover Bridge. A sheen of oil coating the water, yet in the distance fishing boats could still be seen. The people of Ennore still have to make a living and feed their families and communities, but it is not easy to make a living as a fisherman when the fish are scarce and the water is contaminated with toxins released by surrounding industries. The Coastal Resource Centre’s work has helped these communities come together to protest against continued development in the Ennore Creek region and fight for their right to a clean, liveable, environment.

In a meeting here at the office, I once heard someone say “Only idiots get clearances.”  They were speaking of environmental clearances for project proposals, and the tendency for industries to develop or expand their projects without seeking the proper authorization.  Unauthorized development continues in Ennore.  New fly ash ponds for thermal power plants are being developed without authorization.  Fraudulent maps have been used to push projects forward, skirting around the requirements of coastal resource regulations.

Our Toxic Tour of Ennore was both disheartening and motivating. It was shocking to see just how closely concentrated these polluting industries are located, but after hearing both Pooja and Saranavan speak about their work and seeing how they interact with the communities, one has to hope that Ennore will be brought into the public eye. 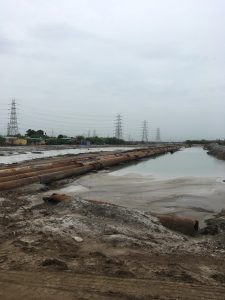 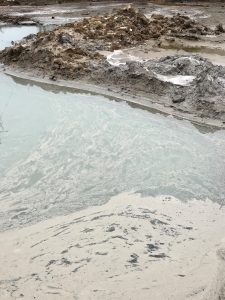 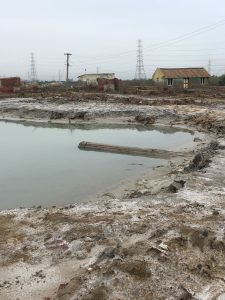