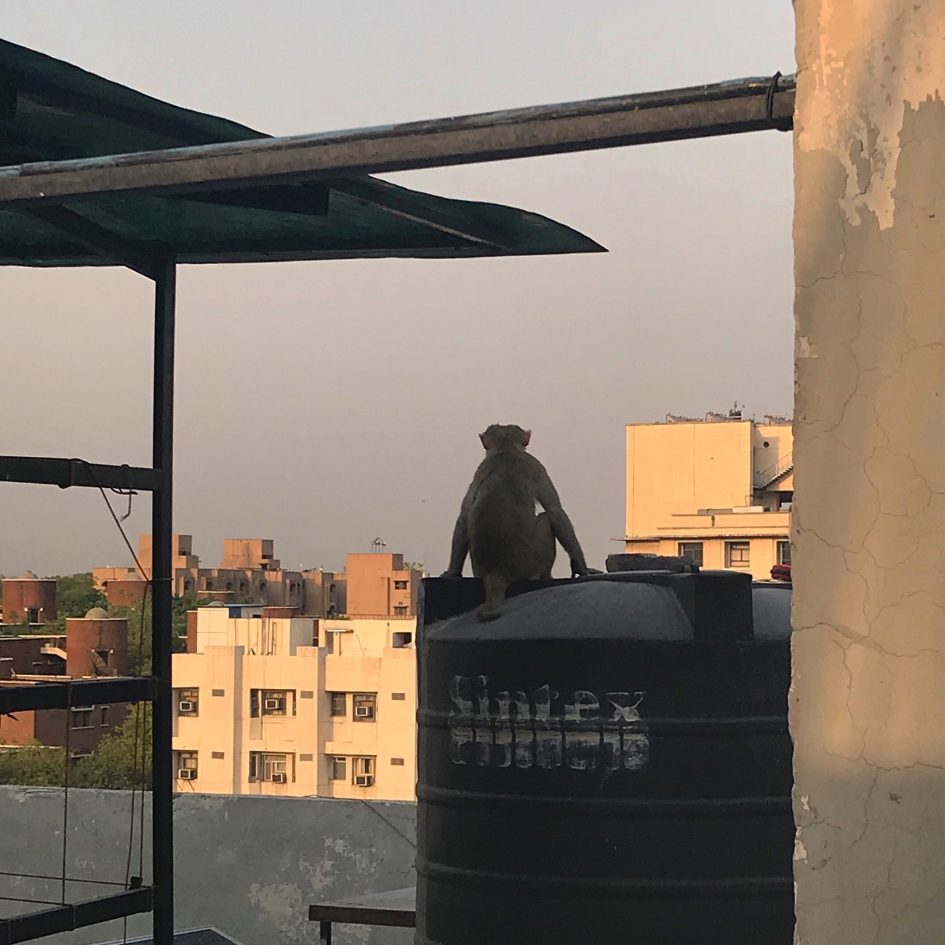 Since mid-May, I have been living in New Delhi, India working with the Society for Participatory Research in Asia (PRIA) as an intern. It’s hard to believe a whole month has passed; I can easily imagine that 5 months from now I’ll look back and wonder where all the time went! In addition to cramming as much exploring of Delhi into the weekends as possible, the last several weeks have consisted of a lot of learning about PRIA’s approach to engaging with communities and people as a research NGO. Their worldview, and methodology when conducting research, centers on a participatory approach, which is based on a full, ongoing partnership between the researcher and the people on whom the research is focused. Participatory research is essentially a system of knowledge generation by ordinary citizens; community members are understood to be the experts on their own lives. Thus, the role of the researcher is largely to help facilitate actions based on citizen’s self-identified needs, priorities, and solutions addressing those needs. Importantly, the participatory research approach, and PRIA, stresses that research is a process of mutual learning.

Perhaps the biggest area of learning for me thus far has had to do with letting go. For as long as I can remember, I’ve been someone who likes to have a plan; I like making lists, being on-time, and knowing what is happening when. Since I’ve been in university, my appreciation for spontaneity has grown and I’m definitely not as organized or on top of things as I used to be (especially when it comes to my studying habits!). However, this ‘so what’s the plan?’ mindset has made somewhat of a comeback since I’ve arrived in Delhi. Maybe it’s because there’s only a small window of time to get outside after work ends and before the day’s fatigue starts to hit, maybe it’s because there’s so much going on in Delhi that without a plan it feels impossible to do everything I want to do, or maybe it’s because I am living in an unfamiliar country far away from my friends and family. Whatever the reason, having a ‘plan’ has been reassuring; it provides comfort because it is something that I know is certain, something that I can count on in a new place where I’m still struggling to find my footing.

Prior to the start of this internship, during our pre-departure training, we talked a lot about the importance of staying open-minded. I did my best to come in without expectations, and to be open to and excited about whatever experiences might come my way. Of course, that is hard to do, and I would say that it is pretty near impossible for any of us to completely shed our expectations and assumptions, whether we realize we hold them or not. This is an important aspect of participatory research: recognition that the researcher is not a neutral or value-free individual in pursuit of objective research findings, but rather, a social actor who enters the research setting with their own preconceived notions about the way the world functions. As such, the researcher’s presence has a big influence on the surrounding people, the place, and the research outcome itself.

While preparing for my time in India, I was excited to learn that I would be working on PRIA’s Engaged Citizens, Responsive City project. The project is being implemented in three cities (Ajmer, Jhansi, and Muzaffarpur), and centers on the issue of urban sanitation, which poses a serious health threat,  particularly to the urban poor, in many regions of India. PRIA’s goal with this project is to strengthen capacities of marginalized communities to enable them to voice their rights, demand action from municipalities, and engage in planning and monitoring of sanitation services. Simultaneously, PRIA works to sensitize local government agencies so that they can effectively meet people’s needs and provide the basic services for which they are responsible.

The plan was that I would be spending my first couple weeks at PRIA’s head office in New Delhi, and then going to the field office in Ajmer where I would likely be able to participate in more hands on aspects of the project. In addition to my excitement about the research, I was happy to be spending my time in Ajmer; I would be only a couple hours away from Mikaela (the other intern from UVic), and one of last years interns had a great experience living in Ajmer which was comforting and encouraging to know. However, the plan changed, and I will be heading to Muzaffarpur, Bihar instead. At first, I was really disappointed. I didn’t understand why I couldn’t just go to Ajmer (after all, that was the plan!), and when I told people I was going to Muzaffarpur, some of the reactions were a bit negative which was discouraging.

I spent a couple days feeling sorry for myself, but eventually, I talked with one of the other interns here from Dublin and she had an important and helpful perspective that I’ve been thinking about ever since. She reminded me that I might not get what I consider to be a satisfying explanation as to why I am going to Muzaffarpur instead of Ajmer, and that I have to be ok with that. In my experience, having a ‘reason’ explaining a change of plans is usually something that many of us assume we will get, something we even feel entitled to. But that’s not something I should assume (especially considering I am an intern), and furthermore, my understanding of which reasons or explanations ‘make sense’ and which don’t is very much shaped by the sociocultural context in which I grew up. In different places around the world, certain explanations are valued more highly than others, or given more ‘explanatory power.’ One example from North America is with the biomedical system, where individual biologies hold a lot of explanatory power in understanding illness. I cannot speak much to how explanatory power manifests in India, but when spending time in a new country or culture, I think learning to be okay with not understanding everything, and letting go of the need to find explanations for the things that don’t ‘make sense’ to us is important.

The intern I was talking with also suggested I think through the reasons that I was so set on going to Ajmer. In doing so, I had to remind myself of a couple things. The first is that I applied to this internship, and I came into it wanting to be challenged and to push myself outside of my comfort zone. The second is that my priority here is to learn, and to work! And the third is that wherever I go, I will be a very temporary visitor in a place that is a permanent home to many. Having this choice to come and go when I please, whether it is here in India, where I grew up in the US, or where I’ve spent the last 5 years in Canada, is a huge privilege.

So as I pass the 1 month mark of my time living in India and working with PRIA, I’ve been thinking a lot about the expectations and assumptions that I’ve brought here with me, some of which I am only starting to realize I have, and others which I am not yet able to recognize in myself. Letting go of expectations can be really hard, and challenging your own assumptions can be uncomfortable and confusing. In participatory research too, letting go of a set research agenda and predictions about the progression and outcome of the research is important. Everyday, I have been practicing this ‘art of letting go,’ whether it’s when I’m riding in an auto-rickshaw in heavy, seemingly chaotic traffic and I have to just trust that everyone really knows what they’re doing (which they do) even when it feels like we could crash at any second, or when I find myself feeling overwhelmed by what I am missing out on at home (this week, most of my friends graduated university and I had always imagined I would be there graduating alongside them), or when there is a sudden change of plans that requires me to be flexible and up for anything (I am ~probably~ going to Muzaffarpur soon, and I am excited about it and very grateful for the opportunity!). Just as being able to let go is an essential part of conducting participatory research, I think it is also key to helping myself make the best of my time here in India (and beyond).

Here are some photos from this past month! 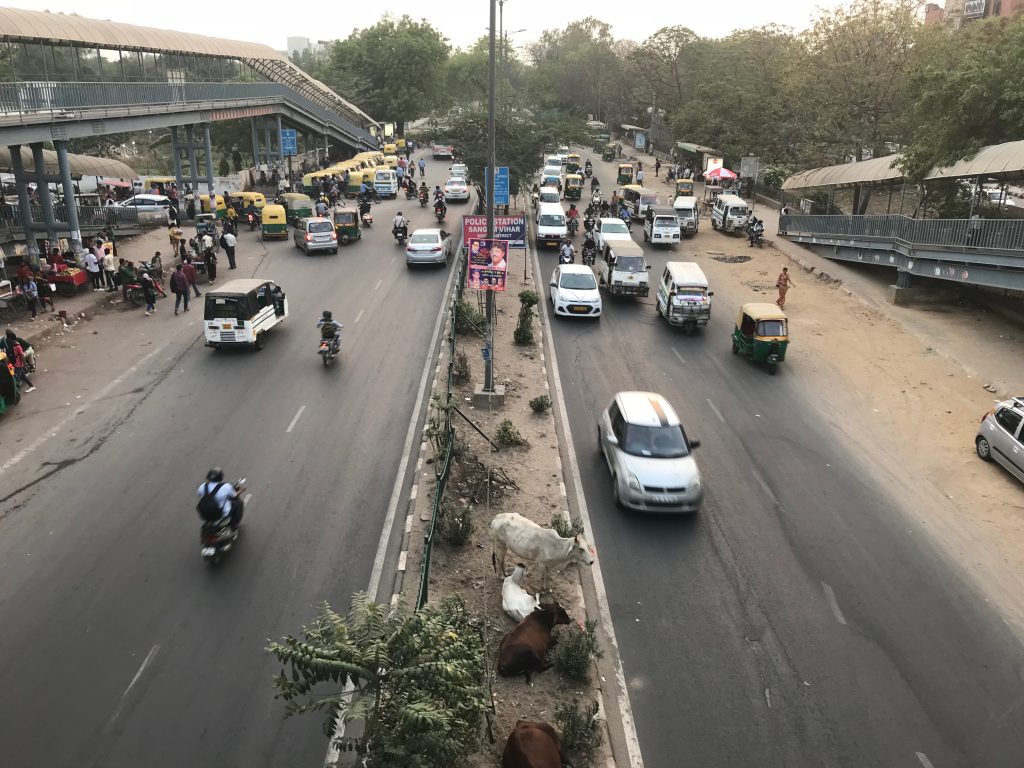 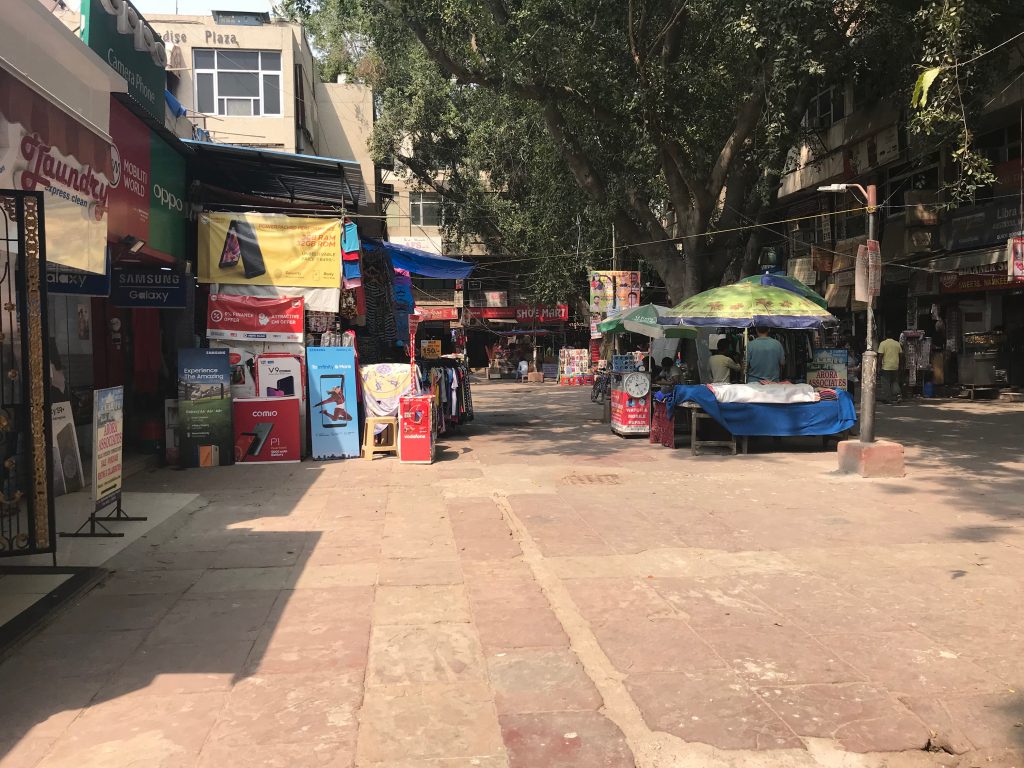 Alaknanda market: we come here a lot to buy fruit and other snacks 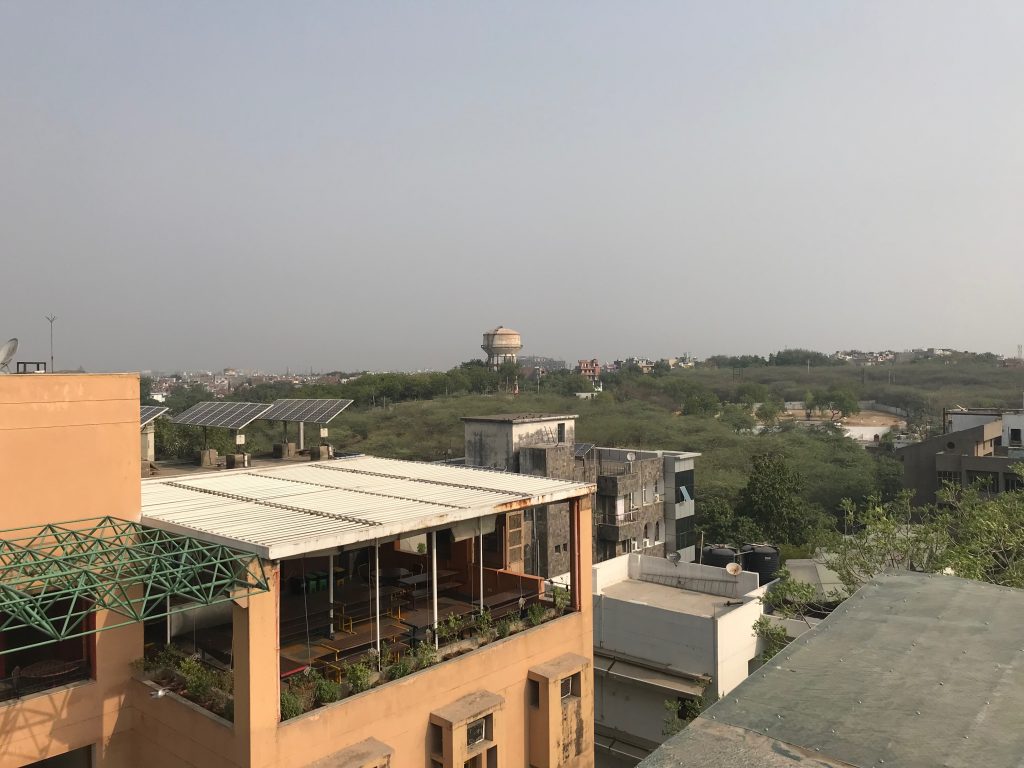 From the roof of PRIA 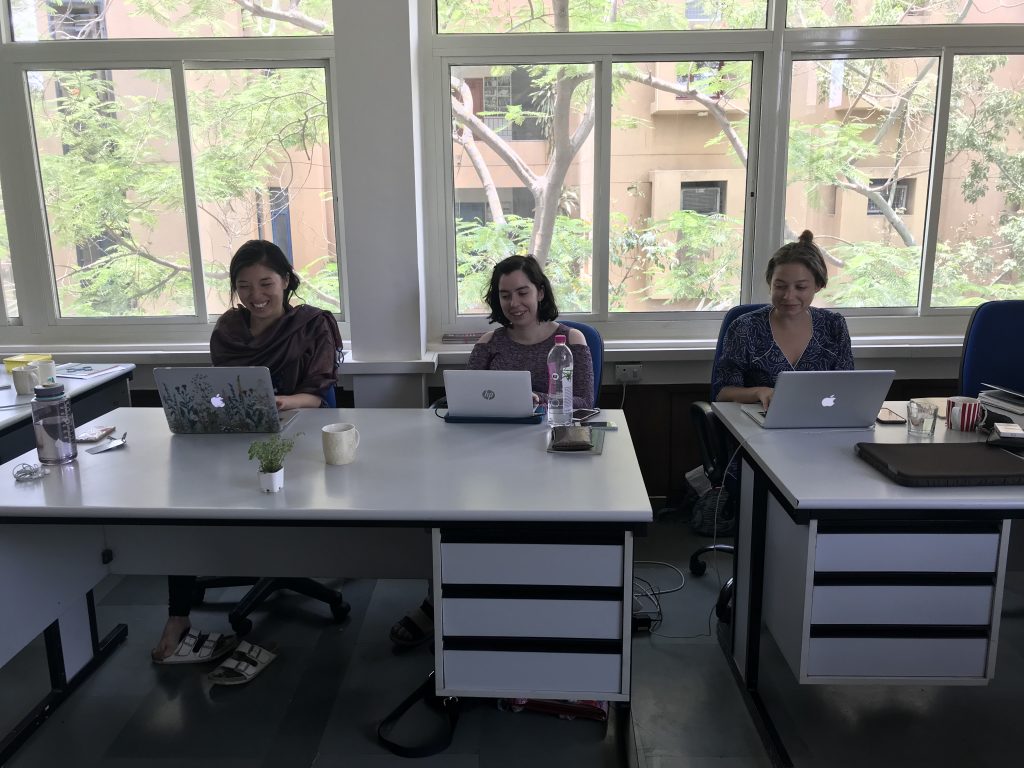 Interns Mikaela, Kelly and Alissa working in the PRIA office where we’ve been spending most of our time 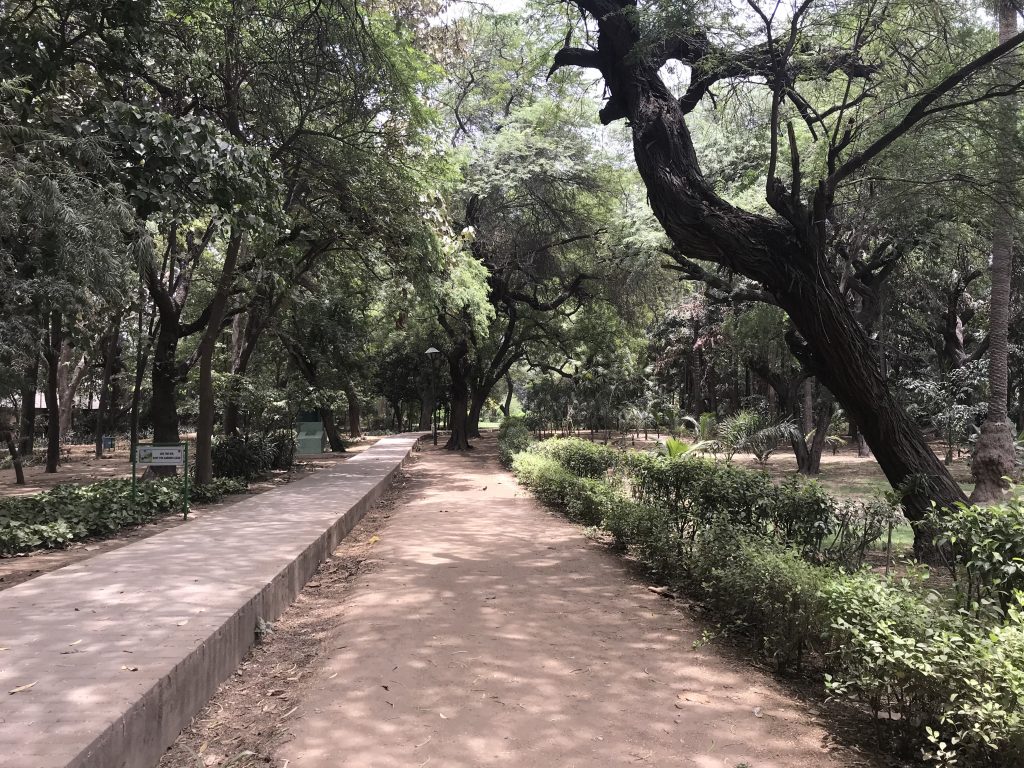 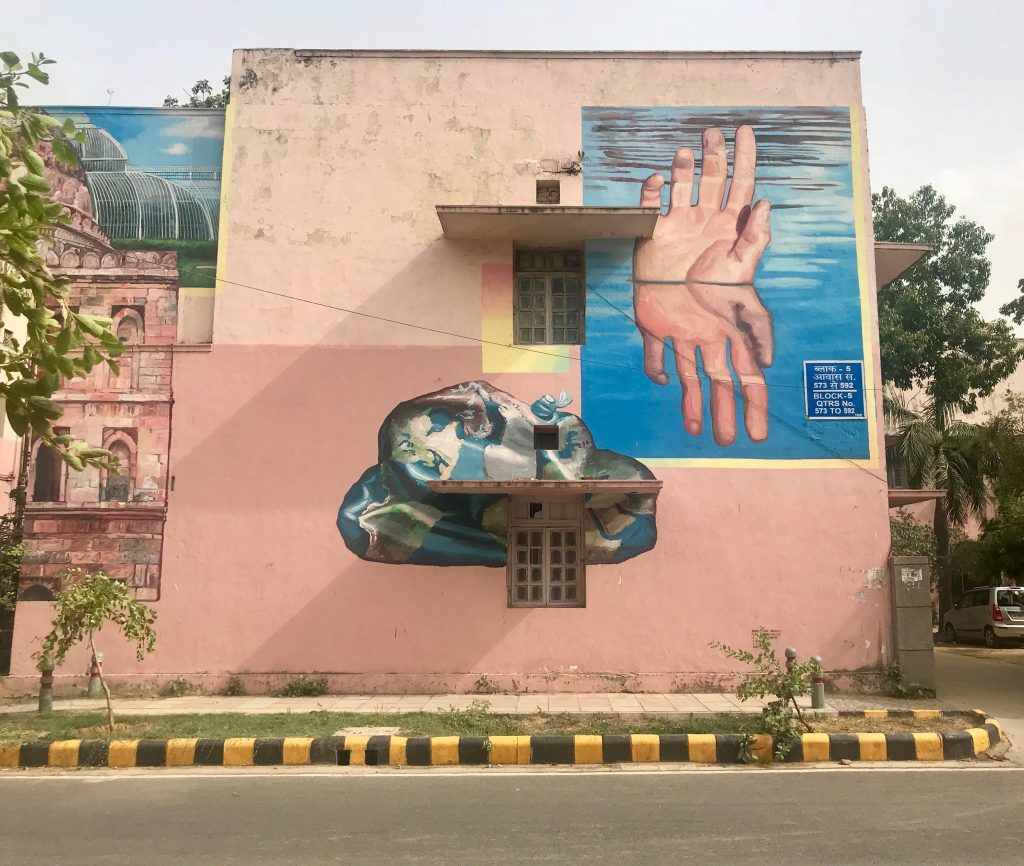 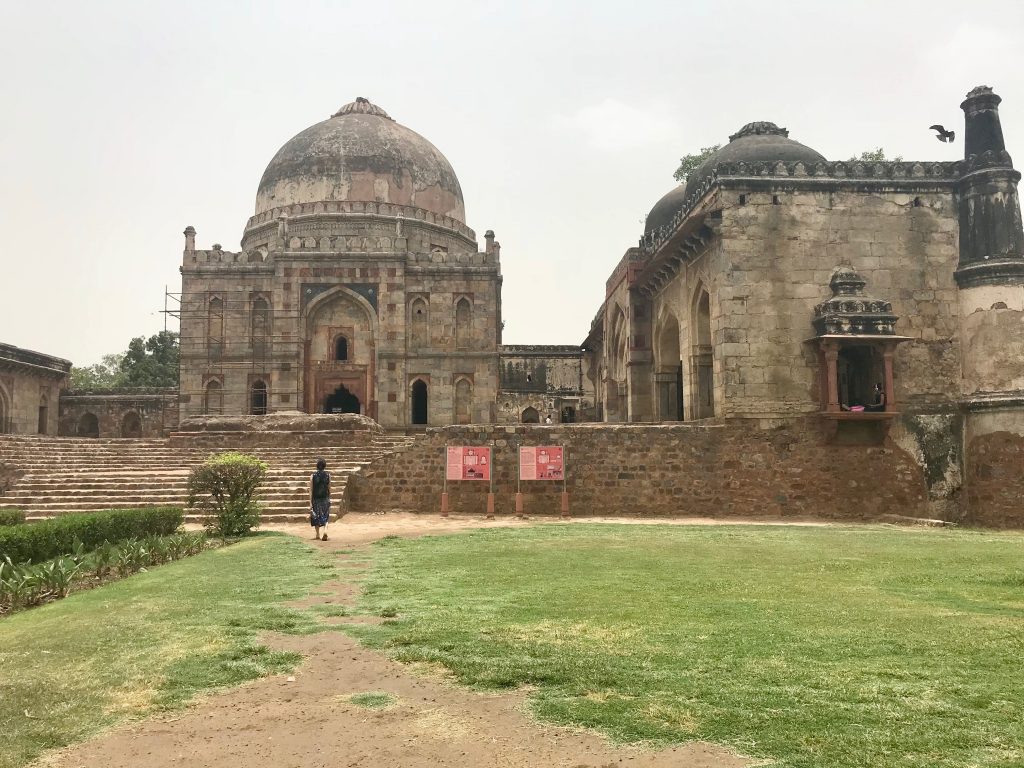 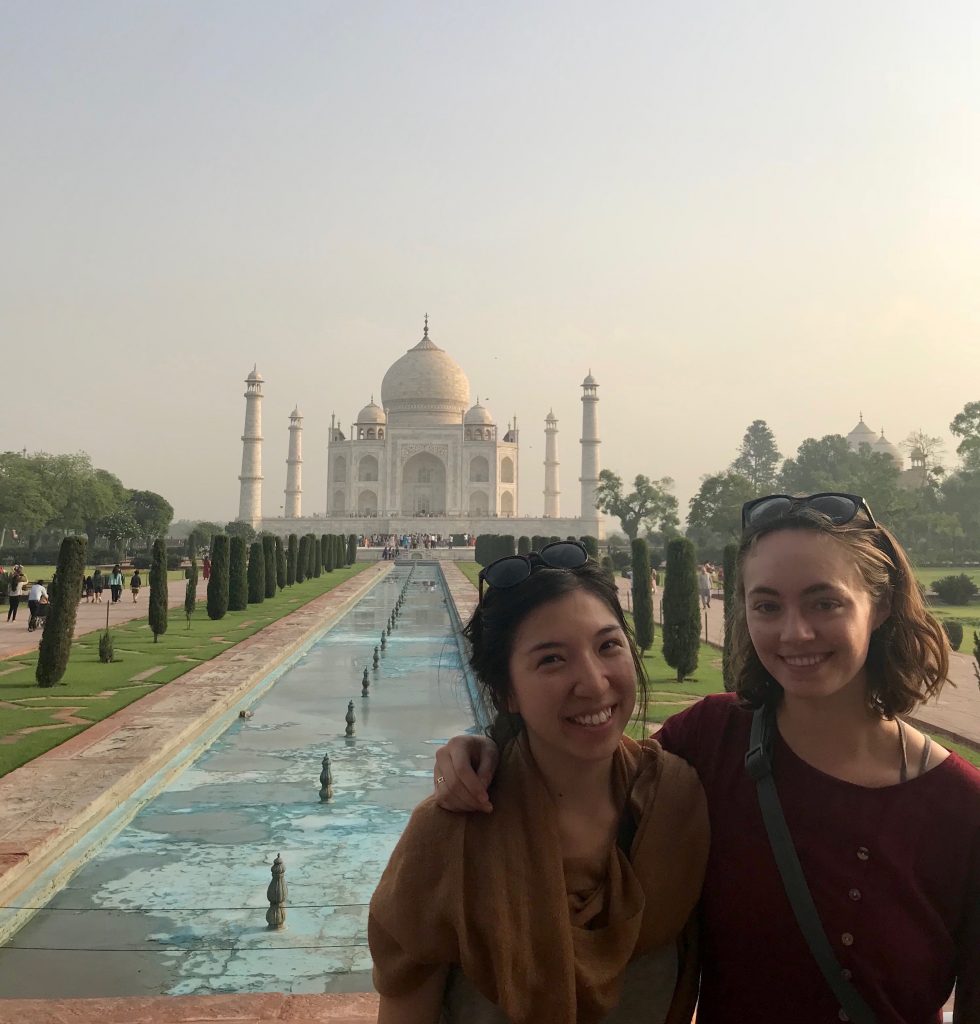 Hello! My name is Clara. I have recently completed my bachelor's degree in Anthropology at UVic, and I am very excited and grateful to be spending my time in India working with the Society for Participatory Research in Asia (PRIA). Here you will find a collection of my questions, stories and reflections surrounding this experience.