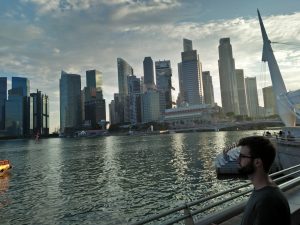 Singapore is a gorgeous city, immaculate and well kept infrastructure; clean and wide sidewalks; huge trees and vegetation everywhere; and public art installations around every corner were truly inspiring to see. I only had 48 hours as I was making a visa run to renew my Malaysia visa. Since I was going alone I decided to try couch surfing for the first time, as the prospect of finding free accommodation and a willing host sounded pretty good. I was very lucky when Uncle Roland, my host, hit me back and accepted my proposal. Not 24 hours later, he was waiting for me a the Singapore airport with an extra transit pass in hand.

On the subway he was excited to point things out as we passed by. Asking me what I wanted to see, I told him that I heard great things about the city’s urban planning and was looking forward to exploring. Hearing this, he was excited to point out the huge public housing blocks that would soon become a common sight. A proud and semi-retired Singaporean citizen, he was excited to show me around all weekend and upon hearing my interests, took me to the Singapore Housing and Development Board headquarters that were conveniently attached to the metro station.

This was the definite highlight of the trip. Together we toured 4 different units, from the small one bedroom designed for couples to a large 4 bedroom unit. While the apartments were tight, they are built to last with modern amenities included. My favorite design element was the steel reinforced crisis shelters/closets we found in each unit.

Growing up in Victoria, where the lack of affordable housing has been one of the premier social issues of my time, this was truly a sight. In my mind, public housing has always conjured up images of economic disenfranchisement, disrepair, and overall poverty, and the Soviet style concrete jungles that remain permanent installations of many Eastern European cities. Singapore successfully demonstrates what can be done for public housing with good policy.

The Housing Development Board (HDB) that is responsible for both overseeing the construction of public housing and the sale of units to the people of Singapore. Some 81% of the population is served by government housing programs, and 79% of households own their government provided apartments (Haskins, 2011).

A key public policy priority during the early years of Singapores post-independence nation-building exercise was to help the population obtain decent housing. It appears this policy has been a resounding success, and has created a nation of homeowners while simultaneously avoiding the growth of slums and homelessness that plague so many other capitalist countries. While inspiring to see, I am forced to wonder if similar policies are possible in BC, where issues stemming from a lack of affordable housing continue to suffocate our cities. While Singapore is in a unique position, being a tiny land scarce island in the middle of the busiest shipping lane in the world, one cannot help but wonder whether these policies are replicable elsewhere. Interestingly, Singapore only spends %16.7 of the its GDP on all its government programs, including social welfare spending, in contrast to Canada and Northern Europe where 35% is the norm (Haskins, 2011).

Uncle Roland’s apartment was built by the HDB in the early 1980s, but the age doesn’t show; the elevators have been renovated; the walls are repaired and repainted every 10 years; and both his bathrooms were recently renovated. On bathrooms, he proudly told me that he only paid 900SGD for the whole renovation, including labour costs, materials, and the new toilets, sinks, and showers. Why so cheap? The government heavily subsidizes the renovation costs.