Luc Nadeau – Blog 2: A Brief Story of Race, Power and State in Malaysia 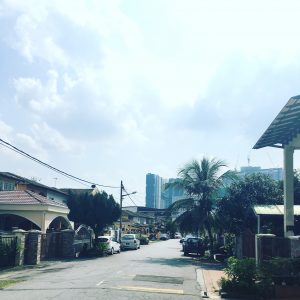 Malaysia is an extremely racialized society. Walking around Kuala Lumpur, it is impossible not to notice the fragmentation and construction of some of the city’s many neighbourhoods according to racial division. In Ampang Point, the neighbourhood in which I reside, I can see three distinct communities on my walk to work alone (Malay, Arab, Korean). Walking around is one method of rudimentary observation, talking about it with those who experience it is another. And that’s just it; it’s impossible to avoid the topic in conversation. Most of the conversations I’ve had with random strangers on the street have somehow devolved into conversations about race and power in Malaysia. This is not a topic that I am well versed in or very familiar with, so bear with me. Please keep in mind that I do not claim any power of definition here, these are just some basic observations of my own backed with a couple scholarly sources.

“What is a Malaysian anyway?” This is a rhetorical question one my Malaysian friends asks every time a question involving an unfortunately sweeping identity based generalization about politics, business, culture, or almost any topic in particular comes up. There is no single answer here, only a jab at the profound lack of a unified Malaysian national identity. Malaysia is not a multicultural state, but rather a multiracial and a multinational state. Some 60% of the population is Bumiputera Malay, a term signifying Malays and the indigenous groups of Malaysia (Chi, 56). Malays being descendent of migrants from what is now Indonesia. 30% of the population is Chinese Malay, mostly descendants of Han Chinese merchants (Chi, 51). Indians make up the third largest portion, followed by many other smaller groupings. Malaysia demonstrates its commitment to multiracialism by designating the population into four distinct identities – Chinese, Malays, Indians, and Others (Fee, 2). These designations can be found on a citizen’s identity card.

As a construction of British colonialism, Malaysia found itself as a state without a nation. One of the first challenges for any state is consolidating and maintaining political legitimacy. Malaysia tackled this problem by pursuing a model of dominant conformity, that is, promoting the dominant ethnic identity of Malay as the basis for national identity (Fee, 2). The policy of dominant conformity comes at a cost however, such as the alienation of other identities from the arena of allowed political discourse. Malaysia essentializes ethnic identity, reducing it a “pure” thing and treating that as an observable existing entity that assumes inherently unique cultural traits that can then be used to form the basis of government policy (Fee, 2).

This brings me to a conversation I had with an elderly Chinese fellow of 75, Mr Hong Kong (This is the moniker he provided!). I was hiking around the jungle hills that surround Ampang when I ran into Mr Hong Kong as he was preparing to go fishing in the small lake that occupies a plateau half way up the hills. He asked me where I was from, what I was doing in Malaysia etc. Before long, the conversation turned into a sort of monologue with Mr Hong Kong sharing his take on a recent business event involving the acquisition of a 49.9% stake in Proton Saga, a Malaysian automobile manufacturer, by a Chinese company. Mr Hong Kong was poking fun and laughing at a statement made by the former Malay chairman of the company, in which he compares the acquisition akin to “losing his child” (The Star, 2017). He included a lively re-enactment with crocodile tears and all. I must confess, it was humorous to watch. After this performance, he made some contentious statements regarding the differences between the Malay and Chinese approaches to business. In essence, he didn’t have anything good to say about Malay business leadership while elevating the Chinese as the only ones capable of properly running a company such as Proton Saga. We parted ways soon after and I was left feeling curious as to why Mr Hong Kong felt the way he did about the differences between Malay and Chinese business practice.

Indeed there is an observable ethnic hierarchy in Malaysia. The Chinese, despite their political marginalization, dominate the economy and predominantly make up the majority of upper class. Indians also makeup a significant portion of the upper class, leaving Malays and Others to occupy the working class position in the social hierarchy. This clear ethnic division of labour owes its origins to colonialism. Divide and rule has been a classic tactic employed by conquerors as a method of administration and control, and the British used it generously. Under British indirect rule, the British were on top and acted as administrators, often ruling through proxies (Chi, 55). The Chinese and Indians worked in industry, such as mining and the growing of cash crops for export (Chi, 55). Malays occupied the lowest tier in the division of labour, working as farmers and manual labourers (Chi, 55). Upon decolonization, the British attempted to create a plural system of government, allowing all ethnic groups equal standing under law (Chi, 56). Malays rejected the British project, using their majority stake to forge a constitution guaranteeing the primacy of Malay political rights. Janine Chi argues that this was in response to fears that a plural system would solidify the Chinese ethnic position in the division of labour (56).

Seventy years later, there remain strong feelings of resentment between ethnic identities in Malaysia. Despite Malay political primacy, the Chinese maintain a solid grasp on economic privilege. Efforts to reduce Chinese pre-eminence in the economic sphere have come up short, however there is a growing Malay capitalist class. The 1971 New Economic Policy was implemented with the goal of redistributing Chinese and foreign wealth into Malay hands (Chi, 57). State subsidies were directed towards Malay businesses despite Chinese resistance. However, the Chinese adapted by using Malay “front” partners; using Malays as registered owners while using Chinese talent to direct and manage business (Chi, 57). This Chinese reliance on Malay front partners has been successful but it has also lead to the growth of a new Malay capitalist class through front partners eventually accumulating enough capital to start their own enterprise.

Thus the legacies of colonialism remain. Mr Hong Kong may have been right in his assertion elevating Chinese business competence above that of the Malays, however in his story he neglected to mention the effects of colonialism on the division of labour in Malaysia. Given Malay political primacy over the state, I would speculate that it is only a matter of time before an equalization of capitalist competence emerges between the competing identities. However, the Chinese continue to demonstrate considerable resilience to political and economic discrimination, leaving me to believe in their strong economic entrenchment in the Malaysia political economy. For the sake of brevity, I have chosen to tell and extraordinarily brief account of colonialism, essentialization, capitalist development, race, and the history of Malaysian political-economic development. These processes are exponentially more complex than what I have explained here. Despite this, I found this story helpful in explaining the origins of some of the racial resentment I have witnessed over my first 6 weeks in Malaysia.