Seema Prasad – Blog 3: As A Woman In Malaysia… 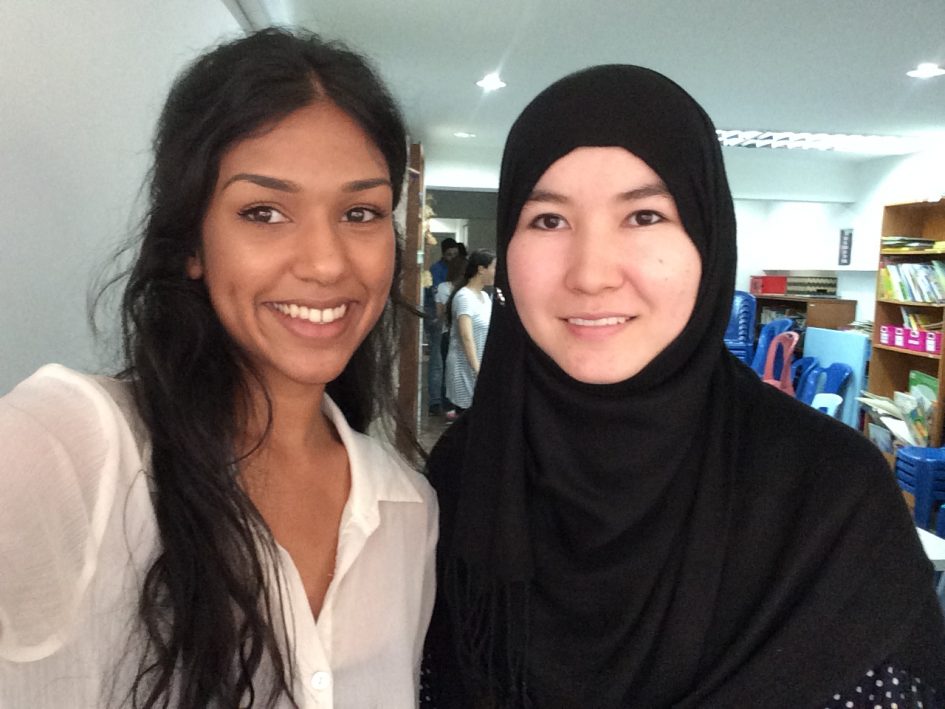 I’ve encountered challenges as a woman in Malaysia that I wouldn’t have come across if I was the opposite sex. As an outspoken, confident and independent individual who grew up in Canada, these challenges, which Malaysian women overlook daily, hit me hard. My everyday routine is now built around where I can go when there is the least amount of men around. This is something I have never even considered back home.

We were warned about this before leaving for our trip. Robyn explained to us that women make use of the daylight hours to avoid the night, as this is when the public space turns into “men’s space.” She explained to us that we would need to start our days earlier. My mom explained to me that, although Islam does not preach the suppression of women, Islam-based cultures are very conservative for women. Although I did not want to arrive in Malaysia with pre-conceived notions of how things were going to be, I already made up in my mind that I was going to fight the conservatism.

Upon arriving to KL, I noticed a big contrast in cultures. Most of the Muslim-Malay women are very conservative, while the men dress how they please. The Indian-Malay are conservative, but to a lesser extent. The Chinese-Malay women are the least conservative. These women will walk around alone wearing shorts and tank tops. I admire them for challenging the social norm, as I know how hard it is to deal with the harassment when walking around showing more than just your arms.

One of the biggest challenges for me is dealing with all the harassment that comes with being a woman. I am not always with another person when I run my errands or walk to/from work. Men are fast to assume that if a woman is walking alone, she has lost her way and must be in need of a man. Walking anywhere alone comes along with honking, men yelling out their windows, and the  constant stares of men. It’s really a shame, and something I don’t think I will ever understand or get used to.

It was also difficult for me to create a daily schedule for myself. As a woman, I should understand where my safe spaces are in my community and the appropriate times to go there. For example, if I want to go to the gym, I must make sure I go straight after work. The gym is only a safe space for me during day-light hours. When it becomes dark and the weather cools down, the gym floods with men. I also must make sure I have food for dinner before it gets dark. Restaurants are not a safe space for a woman to eat alone at after dark. Walking home in the dark has also proven dangerous. It is interesting because Luc does not have to worry about safe spaces solely because he is a male. He does however, have to worry about his safety because of his ethnicity. This is not his fault in the least, but an interesting contrast to have between two intern’s daily routines. 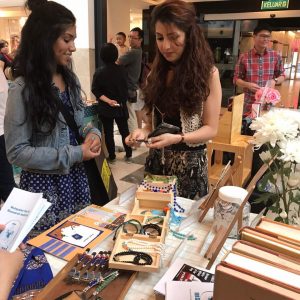 MSRI holds a program called ELHAM that teaches refugee women how to sew, create jewelry and more so they can sell their crafts to make money. This woman is a refugee that helps hold the workshops.

I am lucky that I work in an organization run by strong female figures. These women exercise their power and challenge the idea of all women needing a man. Being around Malaysian women who don’t buy into the idea of letting a man take control led me to assume that the female population believes in themselves and are the spark for change. 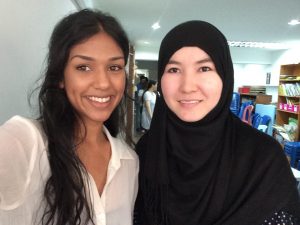 Haleema is a refugee from Pakistan. She has been in Malaysia for 5 years. She is only 23 years old and is the head teacher of the school. She is extremely sweet and hard-working.

The dynamics of feminism in the context of the refugee population in Malaysia is very complicated. Working in the school, I take full advantage of teaching the kids to respect one another (especially the women), and encouraging girls to think critically about what message their society is spreading about how women should look, act and think. I want the girls to understand that they are powerful and valuable, and I want the girls to critically think about where their value comes from. I try to do this by being a good role-model. I try to challenge gender norms as often as I can by carrying heavy things instead of leaving it to the men, asking the girls to do tasks that normally boys would do, and encouraging the girls not to be shy in class. I also participate in sports with the kids, I challenge the boys patriarchal comments, and I encourage the girls to dream big. 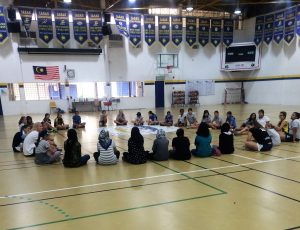 The nearby international school invited some of our girls to participate in their weekly basketball practice.

To me, encouraging these young women to be outspoken, outgoing and powerful is not only a way to get back at the men who stare and shout, but also a way to know that I’m leaving Ampang a little bit better than when I came. We know that better treatment of women leads to a better quality of life for everyone. Change takes time and it starts by education and encouragement. 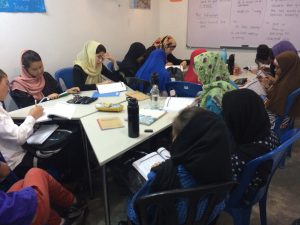 Grade 7 girls in my English class.

I have never been intimidated by someone because they are a man, so in a country where socially, men hold the power, I’ve been challenged and challenge others. Although I am learning to adapt to keep out of trouble, I know that being part of a movement for independent and strong women can only help my community progress. There is a fine line between adapting to a culture and staying true to yourself and your values. I cannot say I’ve found that balance yet, but I am on the road there.