Loreen Regnander – Blog 2.1: From the villages of Chhattisgarh – Tales of challenges, cooperation and mutual inspiration 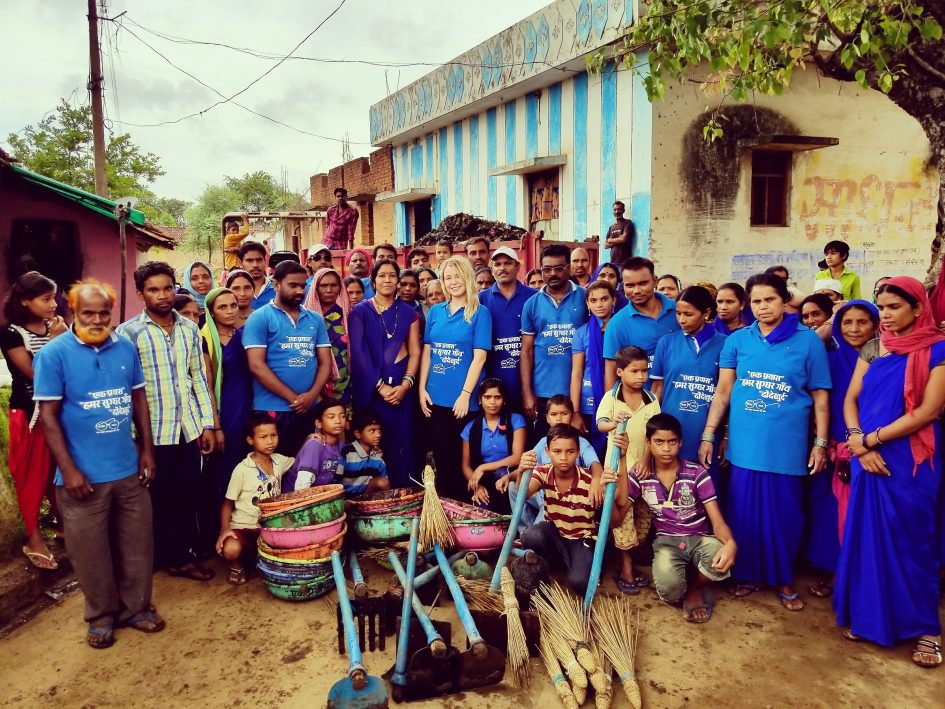 This blog post will discuss my field visit to Donde Khurd, a village about 20km outside of Raipur, Chhattisgarh where I participated in the weekly village Shramdaan. I am currently based in Raipur, Chhattisgarh researching the impacts of the Swachh Bharat Mission in rural communities and villages.
Shramdaan is a community driven initiative that is changing the behavioral practices of rural communities by promoting the benefits of working together to achieve village goals. These goals can range from cleaning a lake to cleaning the streets, and are often organized by village panchayats and community leaders. In translation, shram means labour and daan means donation, and what began as a community led initiative in Varanasi, soon spread across the region to hundreds of villages everywhere. In light of the Swachh Bharat Mission, weekly Shramdaans have been successful in helping villages collectively reach cleanliness targets that are sustained over time. Every Sunday these Shramdaans are carried out as what is quickly becoming a weekly ritual across India (Sivaswamy, R., 2016).

Upon arriving in Donde Khurd early Sunday morning, I see a group of about 100 people gathered in the streets; sweeping, weeding, shoveling out gutters, carrying debris in pails to a garbage truck. Women, men, children, young & old; all participating, working together, laughing, cooperating, communicating. As soon as I arrived I was given an official bright blue Shramdaan “Swachh Bharat” t-shirt, and I immediately asked how I could help! Village Panchayats, residents and local leaders welcome me into their village, give me a shovel and show me how to help clean the gutters of debris by scooping it out and shoveling into pails; that are then carried away by women placing the pails on their heads (that I too learned!) I also helped with pulling weeds, sweeping and carrying the pails to the truck. 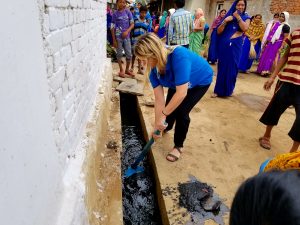 Me at Donde Khurd, learning how to clean gutters. 2017. 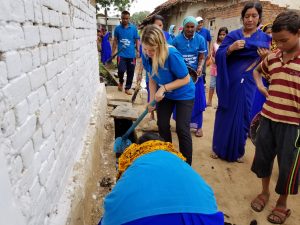 It felt great to be able to meet the village this way, by participating alongside them, watching and observing how they were interacting and work with each other, kids and adults alike. At times, I wasn’t sure if I was really helping, or just offering a laugh to the villagers (who thought my head carrying technique was quite funny!) but nonetheless it felt good to be working alongside them rather than sitting on the other side of a table.
While in Donde Khurd, I learned that this weekly occurrence has been going on now for more than 36 weeks, and has made great impacts on the overall cleanliness of their village (clean gutters prevent flooding, clean streets prevent illness). During this activity, the entire village comes together to take part in various cleaning activities, and has resulted in what very clearly was a clean village (free from debris, garbage & defecation.) However, it was a bit difficult for me, as I just wanted to participate and be treated equally as the other women (who were working a thousand times harder than me), everyone kept telling me how inspiring it was for me to be working with them, but also, it was them who were inspiring me! This made me think of the term, mutual inspiration, where seeing how everyone came together, cooperating with each other to achieve a common goal was unlike anything I have really seen before. This was beautiful to me, and went much further beyond than just working towards a government scheme. They were engaging in direct community action, working together to achieve a greater common good for the entire village. This, in itself is more powerful than any scheme, and made me think that there was nothing this community couldn’t achieve by simply working together. This is a practice where in North America, we would benefit greatly by empowering and employing such community directed action alongside initiatives.

Interestingly, while speaking with some of the natural leaders and local frontline workers in Donde Khurd I learned that issues such as water scarcity has not been a primary concern amongst the village. In some areas such as the local Govt primary school the village alongside the Govt have installed innovative solar powered, rainwater harvesting systems that help recharge groundwater stores in periods of draught as well as collecting large amounts of rainwater during the monsoon season. I later learn from a local student whose parents are rice farmers, that the rice fields are suffering this year from the extreme and unusual lack of rain. Overall the people I speak with are beyond excited to tell me how their village came to be so clean, how they motivate each other to do their part in ensuring village cleanliness. A natural village leader, Mrs. Meena Chhetija proudly describes her role in motivating the locals of Donde Khurd to change and improve their sanitation practices. “Babies are no longer getting sick, people are healthier and our village is much cleaner” Meena explains, “it makes me so happy, I am now always smiling, I am proud,” her enthusiasm is contagious. 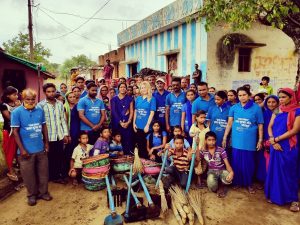 There seems to be a level of proactiveness amongst villagers in Donde Khurd, addressing issues such as potential future water scarcity by implementing rainwater collection systems before it has become a problem. Furthermore, they are leading by example; inspiring other surrounding villages to adopt and adapt behavioral practices that will ultimately result in stronger, healthier and more resilient communities that are built upon sustainable values and practices. Understanding the drivers and scope of community values and capacity is crucially important when assessing the impacts of social change and future adaptation abilities, as these types of assessments cannot be simply quantified in data and graphs, they are humanistic by nature and therefore must be approached as such. Conclusively, by understanding how various communities can work together and support each other, schemes like SBM and community based organizations like PRIA would benefit greatly by altering implementation approaches to uniquely align with the specific values (including but not limited to, environmental, social and economic) and aspects of different communities.

I would like to thank the community of Donde Khurd for being so welcoming and hospitable to my visits. Mr. Suraj Tandon, Ved Prakesh and Mrs. Binda Devhare, and all others.

Sivaswamy, R., If it’s Sunday, it must be Shramdaan day! Here’s how you can also donate effort, not
money. 2016. Retrieved online: http://www.thebetterindia.com/55905/shramdaan-sunday-donate-effort-cleanup-environment-temsutula-imsong/