I was lucky enough to have been taken on a tour of the waste resources and recycling facilities in Yokohama City to learn about the City’s process in waste disposal, recycling, and management. The site visit showed me that there is more to garbage than what I had initially thought. Previous to this I hadn’t put much thought into how we treat our garbage and whether it could be viewed as an important resource. However, I had always known that we collectively consume more than is needed and produce far too much waste, which has in turn contributed to much broader issues (environmental degradation, environmental contamination, economic disparity, and climate change just to name a few– but we won’t get too deep into that for now). I realized that growing up I was never taught about our garbage system in its entirety, only that we must recycle and compost; but never about exactly where my garbage goes, what happens to my garbage if it isn’t recycled, what happens when it is, where does my compost go, who uses my compost, or how long will the landfill last? These seemingly simple questions were all answered during my day visit to 3 waste resource facilities in Yokohama.

Our site visit began at the Tsuzuki Resources and Waste Collection Office. Here we were given a brief introduction to waste collection and waste resources in the area.  A lot of what they do in terms of garbage separation seemed familiar to me. However, unlike the recycling, compost, and garbage separations we usually make in Victoria, there are 10 categories in the sorting process of Yokohama: burnables; dry-cell batteries; spray cans; non-burnables; plastic containers/packaging; cans, bottles, and PET (polyethylene terephthalate) bottles; small metal items; paper; used cloth; and oversized garbage. Not only are they very specific about garbage separation, they are also strict, giving warnings and fines to those who don’t separate their garbage properly. Following along a garbage truck to observe how the workers collect garbage, we noticed their due diligence to ensure proper separation was satisfied– even placing a yellow warning sticker on a bag that had burnables and plastics mixed together. 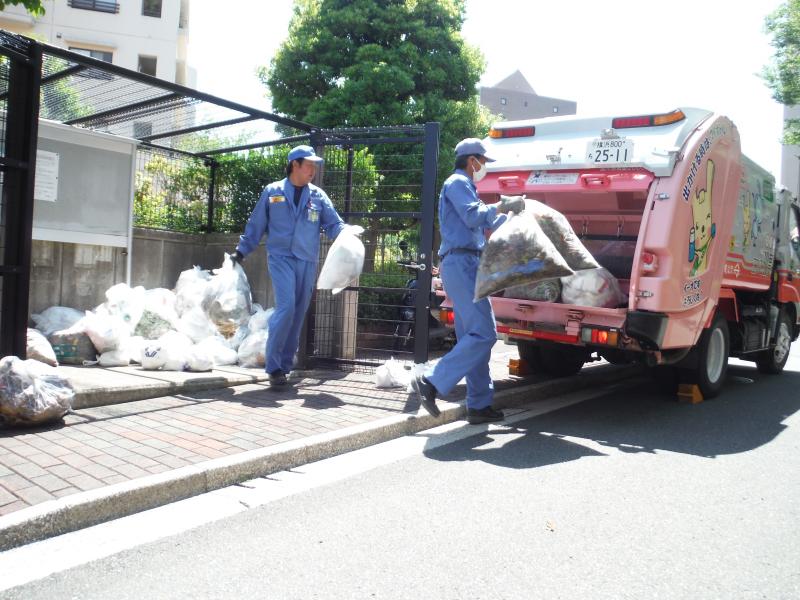 At home we don’t get warnings for our garbage separation; if I throw a plastic bottle into my garbage it gets taken away without question (Don’t worry, I don’t! Save your gasp). We use bins to separate garbage and place them at our curbside, while in Yokohama everyone places their plastic bags into the community’s garbage collecting site, organized by garbage type until it’s time for collection. If there is a problem with the garbage it is the community at fault and not just the careless individual. 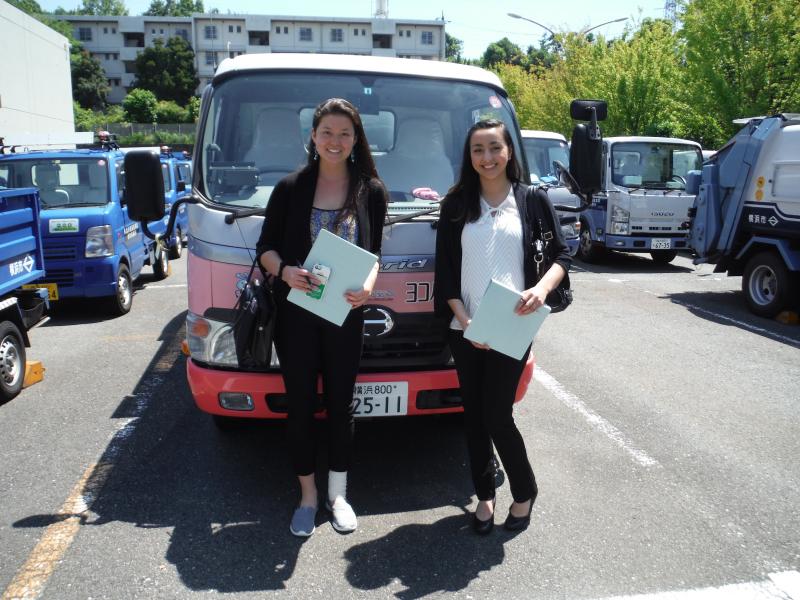 Photo above: Two collection workers demonstrate waste pickup at a collection site. Photo Below: Intern Tabatha from George Mason University and I standing in front of a very cute garbage truck

Next, we paid a visit to the Resources Separation and Recycling Facilities in Midori. All of the materials that are taken to the facilities are metals, plastics, and glass. Separation commences with machinery that tears the plastic garbage bags open, separates cans from plastics and glass, and even separates large pieces of glass by colour. The rest is done by workers standing at conveyor belts, efficiently sorting their assigned material. 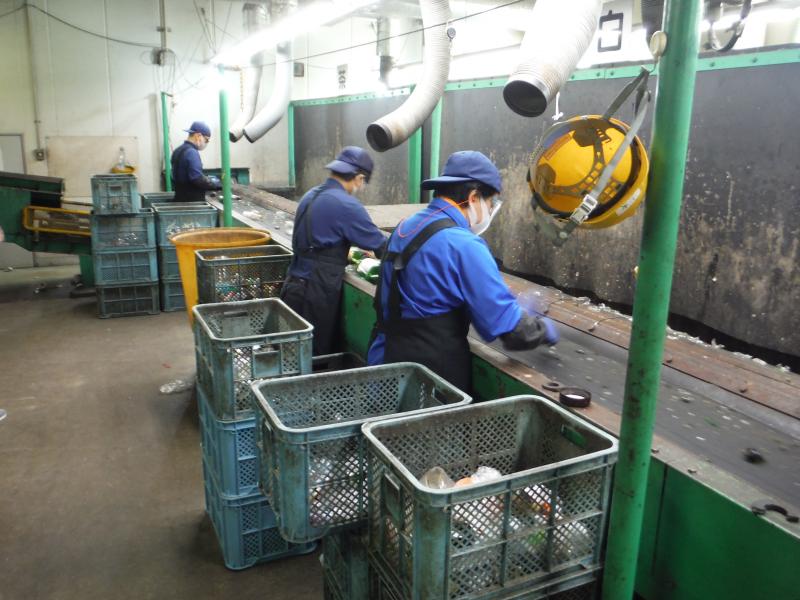 Three workers at a conveyor belt sorting glass by colour

Then, plastics and metals are compressed into transportable squares and taken to be recycled or sold raw to private companies (in this case mostly in China). 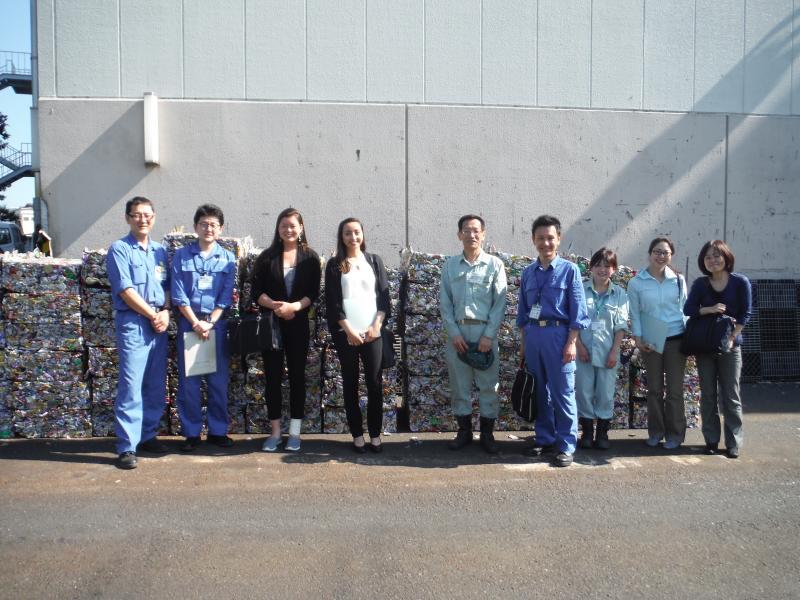 Our final visit was to the Tsuzuki Incineration Plant. This is where the rest of the garbage that couldn’t be recycled or reused is taken. 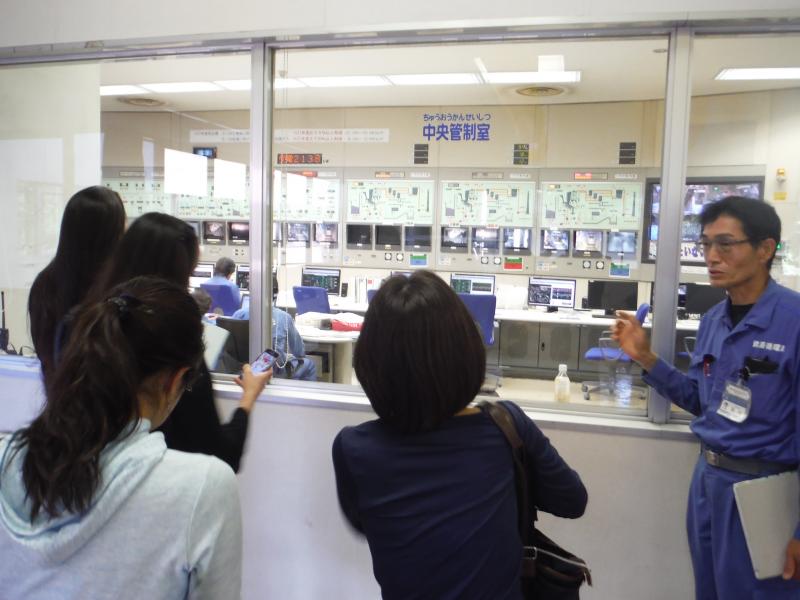 We learned that in the 1960s Japan faced a huge waste problem due to the increase in development and industrialization; because of this incineration plants were introduced to reduce the shear volume of waste being put into the landfill. By the early 2000s they introduced the G30 Plan (which promotes the separation of garbage) and as a result reduced the amount of waste by over 42%. This caused 3 of the 7 incineration plants in Yokohama to close down and has elongated the lifespan of the landfill. Plans to reduce garbage even further have begun in 2010, which emphasises on the 3Rs (reduce, reuse, and recycle) and has targeted reduction to more than 10% by 2025. This particular incinerator not only reduces the volume of waste, it also heats the nearby swimming pool and produces energy for a portion of the city while selling surplus energy to electric power companies. Hearing I was going to an incineration plant I had the connotation it was going to be encased in a dark grey cloud of pollution and smell putrid. I was shocked when we arrived– no smell, and no smoke! The garbage is dumped into a giant enclosed pit and is mixed constantly by giant mechanical claws. 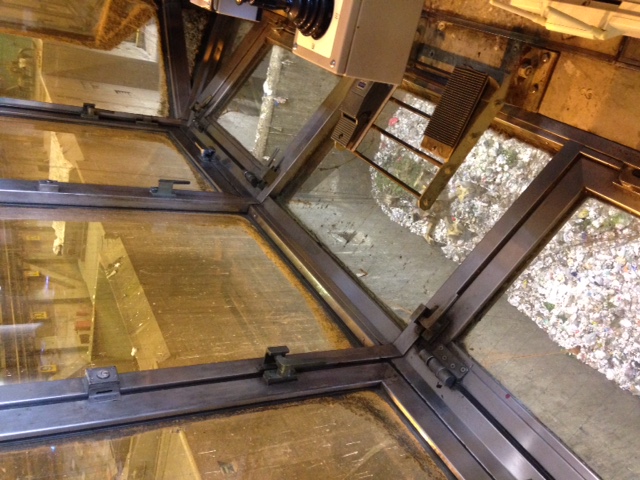 The incineration process is done on a conveyor belt that gets blasted with air taken from the garbage pit and heated to around 900 degrees Celsius. The air is filtered by a variety of high-performance filters to extract toxins (such as dioxins and NOx emissions), soot, and smoke. The remaining ash then gets placed into trucks and transported to the landfill located along the coast. 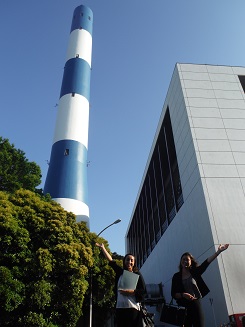 One of the main takeaways for me was how much expertise and knowledge the staff members displayed throughout the site visits. The head of the recycling facility mentioned that he has noticed an increase in how involved workers are in recycling and waste resource education, something he hadn’t seen before. They fully understood the role and impact these facilities have in their city and are passionate to share it. School children get taught about these initiatives and facilities early on, even taking part in tours as part of class curriculum. From what I have observed, Yokohama is very transparent and clear about how you should dispose of your waste and what happens to it. From day one of arriving I was given multiple sheets of information about proper garbage disposal, and told about the culture around garbage disposal. I never received an in-depth education on our garbage system growing up; just bits and pieces that I have acquired through my parents, the internet, school, and city government. Perhaps this has been changing, or maybe other schools received better information on their home’s waste and waste facilities. In Victoria I consider us to be “eco-friendly” or “green”, but I believe there is a lot of room for improvement.

The tours of all the facilities left me thinking about how we can lessen our burden on the environment and each other. Decreasing our waste from what we are consuming seems to be the most crucial part from this point going forward, and something I think Yokohama and Victoria are working on. I am very happy to have been given the chance to visit these facilities, and given an education on Yokohama’s process to this extent. Now to have the same for my home; that is now on my list of things to do when I get back.