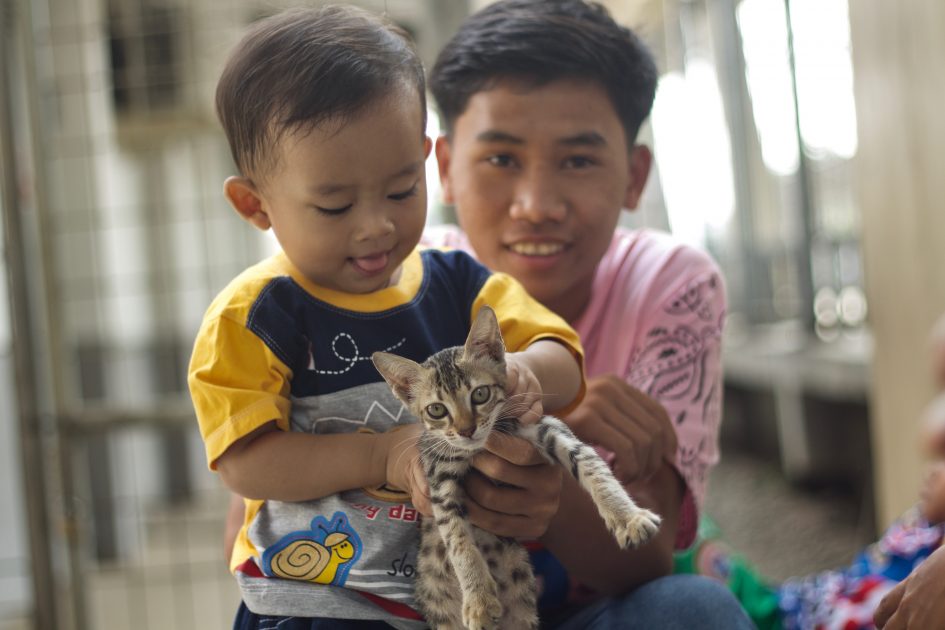 I’m a dog person. I like big wet kisses and that funny kind of smile dogs give you when you rub their tummies. Growing up with a dog it just felt natural to have a big furry companion in my life.

That of course doesn’t mean I don’t like cats. The gentle purr of a friendly cat waiting for a scratch behind the ear is a wonderful sound! Moreover, as a hobby photographer I can’t get enough of cats’ bright, colorful eyes as they look straight into the camera, as if they knew exactly what you wanted.

For religious and safety reasons street dogs in Indonesia are usually dealt with… promptly. There aren’t many puppies around for yours truly to play with. So the next best thing is cats, of which there are many.

Something I’ve realized through my travels is that cats look different around the world. In Japan the pet-shop market pumps out fluffy, flat-faced kitties for eager families. In China grandmas put food out for the long nosed stray cats roaming the streets.

In Indonesia the cats patiently hanging around food stalls tend to have shorter noses, smaller heads, and slanted eyes. Not to mention it’s common to find cats without tails! These differences might be subtle, but to an animal lover they’re undeniable. Just as these cats are differ, so too do their interactions with the humans that surround them.

Cats are everywhere in Indonesia. In an earlier blog I mentioned I was trying to take a picture of at least one new cat a day. The only problem I faced was that there were too many cats to choose from! Cats in front of the boarding house where I lived, cats by my feet while I ate lunch, cats walking across the road, cats sleeping under cars. Now after five months I’m so used to it that I don’t even notice them anymore.

For most Indonesians cats are just a fact of life. In Canada if a street cat got into a restaurant kitchen there would be an immediate call made to the health inspector. In Indonesia? It would be strange to not see a cat or two playing by the chefs feet as he prepares raw meat without washing his hands. Cat on a customer’s table? What do you want me to do about it?

No one notices stray cats in Indonesia. On two separate occasions I asked friends from Jakarta why so many cats in Indonesia only have half tails. Their answer: I’ve never seen a cat with a half tail. I was shocked, and spent the next two days stalking the streets in search of short tailed cats. Was I crazy? But of course not, these friends were so used to cats that they hadn’t given them a good look in years.

While many people ignore cats, there are cat lovers out there yet. This sweet grandma who lives near the best grilled chicken place in town is the proud owner of forty cats. She feeds those she can, and hopes the rest find food on their own before coming home to her fruit stall. The couple who runs the boarding house where we live always leave food out for the chubby orange cat and green eyed calico who recently gave birth. I make no promises about the nutritional value of their offerings though. I once saw a whole pack of Oreos out there in the cat food box.

Everyone has a different idea of what normal is. In Indonesia it’s normal for cats to hang out in restaurants, and maybe normal to find cat hair in your food as well. It’s normalfor cats to be missing tails, and it isn’t strange to have forty cats. Okay, well maybe it’s a little strange to have forty cats, but families all over Jakarta look after a number of cats by leaving food and water out for them.

The normal for cats in Japan was to be pampered and kept in cages, while in China it was almost always grandmas who left food out for cats who almost always found shelter in university campuses.

Cats probably aren’t something you think will be too different when you go abroad. You probably won’t stop to consider how the way cats are treated might surprise you. You have too many other things to think about! You’ll have to adapt to new food, a new language, a whole new culture.

But don’t forget that it’s the little things that make up your cultural experience. Eating on the street wouldn’t be the same without a cat looking up at you with wide eyes hoping you’ll drop some fried chicken. A conversation with a Grandma selling fruit wouldn’t feel as sweet if it wasn’t about her favorite kitten. To understand a country you need to think about the little things too. Take a slice of this big cultural puzzle and think about why it matters, and then maybe the whole pie will be just that much clearer.

Dear Reader,
My name is Maeve, and I'm a third year student at UVic. I'll be spending the next six months working with the Centre for Indonesian Policy Studies (CIPS) in Jakarta, Indonesia. On this blog I'll be sharing my adventures, discussing what I've learnt and unlearnt, and posting some exciting photos of Jakarta. I'm looking forward to sharing my experiences and thoughts with you, and hope you'll join me on my journey of learning.