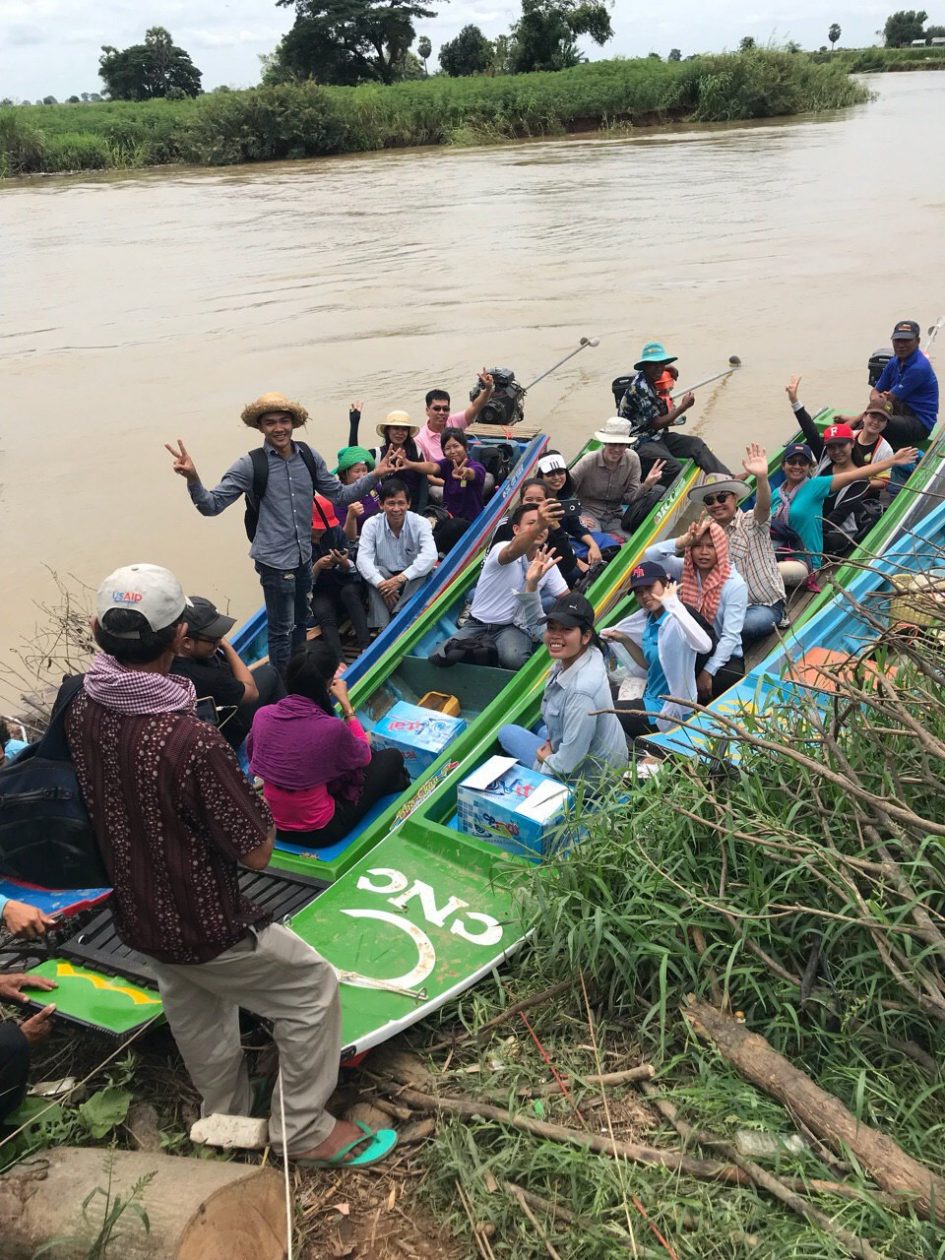 It was a warm afternoon, in early August when we started our journey to a Community Fishery, in Battambong, Cambodia. Prior to this field visit, a colleague and myself exchanged knowledge on human rights, especially on the rights to food, livelihood, health, environment, as well as experience with conducting empirical research, with several students and a few other colleagues at the Raoul Wallenberg Institute of Human Rights and Humanitarian Law (RWI) in Phnom Penh, where I am conducting a research placement – together we made an enthusiastic team of about 18 people and went on the fieldtrip to implement the knowledge that we had all absorbed in the last few days during training. We planned to make observations of the Community Fishery and to separately seek opinions of members of the Community on their food, health, and livelihood before analysing the data collected and writing up the research findings on human rights and the environment. I was happy to be part of and to be able to share what I have been learning during my PhD with and also to learn from everyone in the team and was eager to visit the Community Fishery.

Yet a day earlier, it was pouring and an online weather forecast had predicted more rain on the following day, which would be normal since August is monsoon month. During heavy rain, it would be impossible to conduct outdoor interviews or to make observations of the Community Fishery, so we initially had a feeling that we might have to cancel the trip altogether or at least make much changes to our plans. But in Cambodia, we prefer looking at the sky shortly before our trip to predict rainfall rather than relying entirely on weather forecast and that was what our team did. The day came, it did not rain so we went ahead with the trip. Yet as we started our journey, we learnt that the road to the Community Fishery was too muddy to go all the way by car, so we took the machine boats half way through a different route – the river stream.

We were all excited to travel by boat, which was fun and close to the nature. We relaxed and made jokes and took time to reflect and soak in the nature. The currents were strong in the rainy season. Along the stream on both sides, there were shrubs, some trees and vegetation. At one clearing, several palm trees (Borassus flabellifer), the National tree of Cambodia, stood tall and looked happy after the rain. A few banana trees were visible in the horizon. Some small trees looked like bitter gourd which was a common dish for Cambodian families, yet we were never sure whether they were really bitter gourd trees. A few small huts were littered along the stream which made us wonder if there were any people living there? How much did they depend on river source and fish for their livelihood? The boat was fast and the water splashed inside, as a reminder to those drifting in thoughts to hold on tight.

After about thirty or forty minutes, we reached our destination. We stepped out of the boat and were excited to see more green fields while walking up to the Community Fishery. There were several smaller and bigger lakes. On the dirt path leading to the big conservation lake, there were two small lakes on either side. Sometimes the fishes jumped and fell on the dirt path, so they had to slowly made their way back into the water. Some of us took the fishes we saw on the path and brought them back to the lakes. As we traversed further in, we saw two more small lakes very close to each other and they were joined by a big cement hole. Instead of going through that hole to get from one lake to another, the fishes often jumped and walked on land briefly despite the difficulty to get to another lake close by. A member of the Community Fishery suspected that the fishes did not like the man-made cement.

Many villagers volunteered time to take care of this Community Fishery although they were not permitted to fish from there. In fact, it was difficult for them to survive by depending solely on fishery. Yet, they enthusiastically invested their time to grow trees, to increase the fish, and to promote the importance of biodiversity and they said that they did it to preserve the fish for the next generations and to maintain a steady supply.

It was a refreshing feeling to see the Community Fishery. After some time, we got back to our boats. As the boat travelled through the waters, our thoughts drifted and we digested what we heard and saw under the now, drizzling rain — with a question of our level of consumption, the sources of food, the sustainability of food sources, and the hope and the resilience to sustain the food sources, the biodiversity, and the environment for the next generations.

Ratana Ly is completing her PhD in Law at the University of Victoria through CAPI’s “Regulating globalization in South and Southeast Asia” project, which has the goal of “activating a dynamic community of young global leaders around the world to conduct interdisciplinary research on innovative governance and justice strategies to mitigate the harsher effects of economic globalization in South and Southeast Asia.”