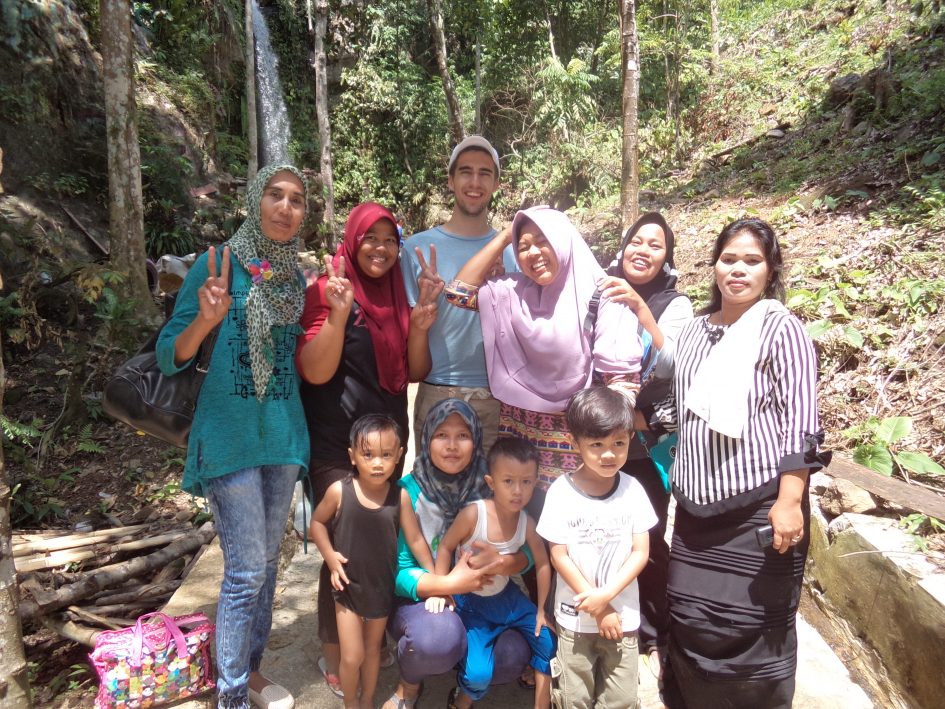 What comes to mind when you think of Indonesia?

What do you know about it? I certainly didn’t know much before taking an Anthropology of Southeast Asia class last year, but even after that I was left with many more questions than answers.

So, months later, and with just a couple days left interning with the Center for Indonesian Policy Studies, in Jakarta, I’ve started to reflect on a bit of what I have learned, and what I do know about this place, after six months of living, working, exploring..and eating. 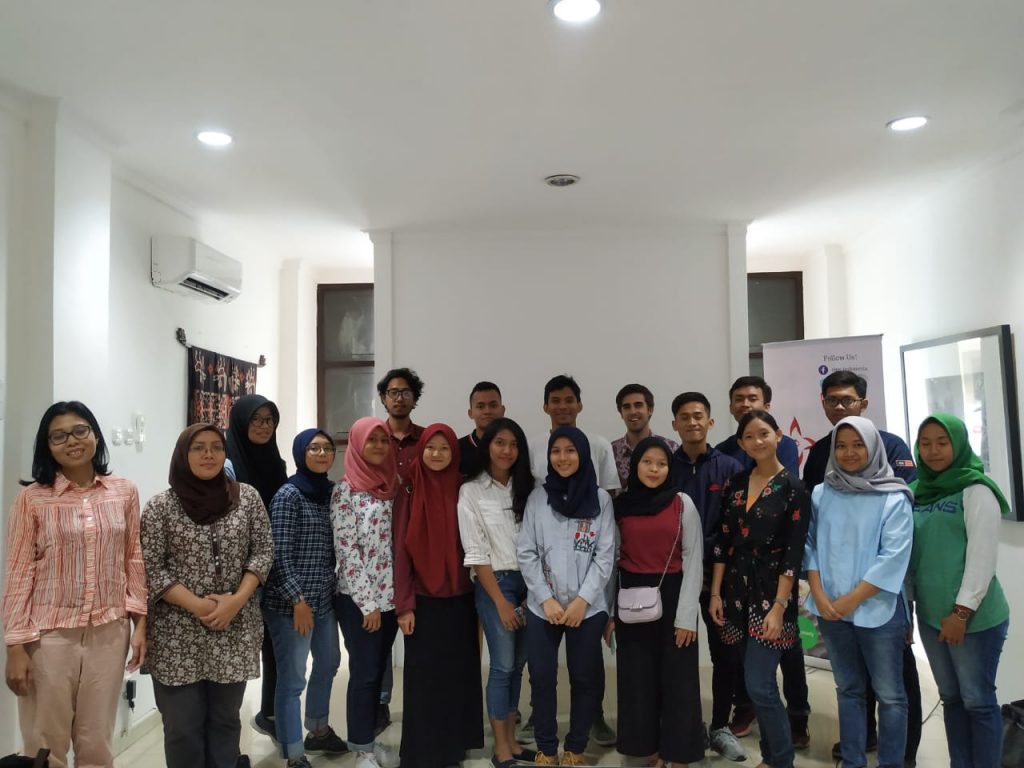 With some volunteers in the CIPS office!

I’ve started to think about how I’m going to answer the barrage of questions I’ll certainly get when I come back in January, like “How was Indonesia?”, or “So, what’s Jakarta like?”.

I have a bit of a problem, because there aren’t really any clear answers to these questions. Jakarta, let alone Indonesia, isn’t a single story. It’s complicated. Sure, every place & every country is complex, but I feel Indonesia is especially tricky place to describe.

The Republic of Indonesia is one of the most diverse countries on Earth, on just about every level; whether it’s geography, culture, language, religion – you name it. It’s also the fourth most populous nation, after China, India, and the United States- with well over 250 million people. It and stretches from Aceh in the west, along the Indian Ocean, all the way to Papua in the east, bordering Papua New Guinea and Oceania. Indonesia, the largest archipelago nation in the world, has (depending on who you ask) about 17,000+ islands. That’s just about enough for each UVic undergrad to have their own.

These many many islands are home to hundreds of ethnic groups..like (just to name a few) the Dayaks, the Sundas, the Javanese, the Batak, the Bantenese, the Betawi, Banjarese, Balinese, the Malay, Mollucans, Madurese, Minangkabau….. you get the idea… Each has their own cultures, food, languages, customs, and way of life – all within this one country. 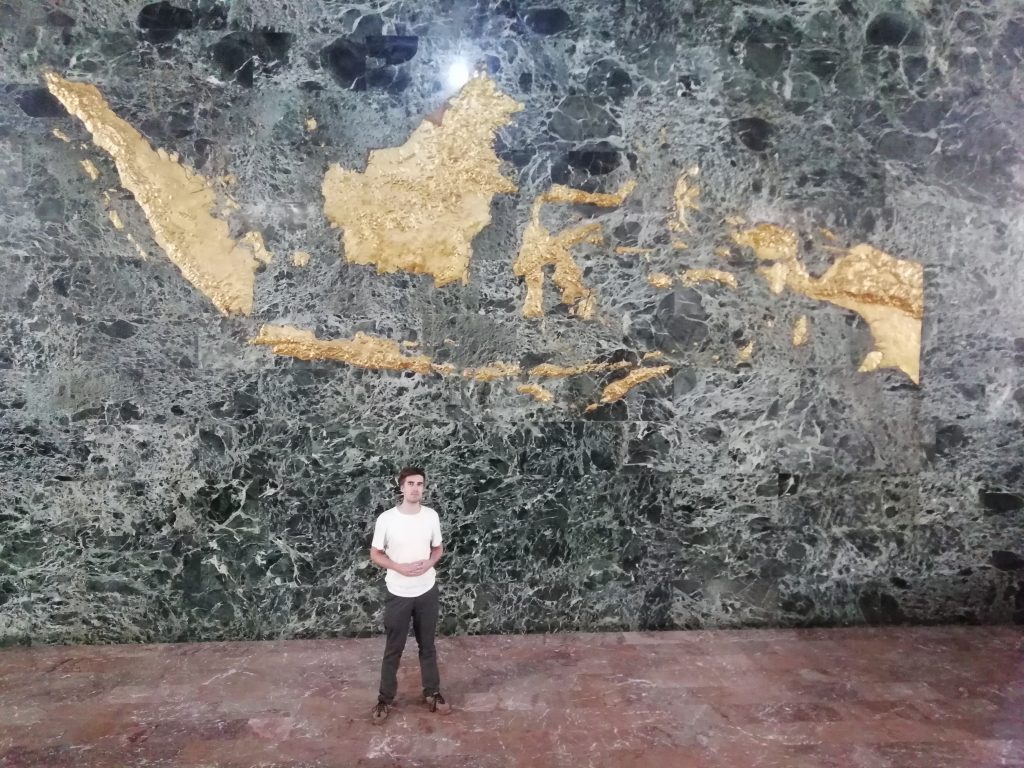 Me, striking an awkward pose in front of Nusantara, the Indonesian name for its archipelago.. seen here inside the National Monument, in Jakarta

Most of my time in Indonesia has been spent exploring Java, the most populous island in the world and which has over half of the country’s population. Java in general, and Jakarta in particular, is the center of power and wealth in this country. As the capital and largest city, it is more ‘developed’ than other parts of the country. This attracts people from all over the far-flung islands of Indonesia, who come to the city to find work, and seek new opportunities. When they do, they bring their cultures with them. This makes Jakarta is a very diverse place, and it holds a unique position in Indonesia – and I’ve found its important not to extrapolate what Jakarta “is like” to what all of Indonesia “is like”.

With Indonesians coming to Jakarta from every corner of the country (not to mention the local Betawi culture, the many Indonesians of Chinese descent, and expats from all around the world), Jakarta is a very diverse place, ethnically, culturally… but also economically. The economy has been growing and growing, and construction is everywhere here, but Indonesia is no exception to economic inequality that plagues so much of the world. 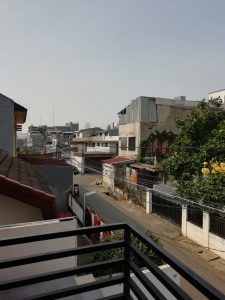 The view from my place in Kebayoran Baru

For example, where I live in Kebayoran Baru, South Jakarta (one of the more affluent parts of town) In five minutes of walking I could end up in both overcrowded, underdeveloped, poverty-stricken neighbourhoods on the banks of polluted riverbanks, or sipping a latte at the nearby Starbucks, (next to a rather elaborate grand piano store).

All this diversity creates a lot of stories – ones hard to boil down into a single response to a question like “What is Jakarta like”? I think its important to experience and get to know these different stories of Jakarta, from the murky rivers to the grand piano stores – but I recognize that being able to experience some of these stories is a huge privilege, not one shared by everyone.

So, although I’m slowly piecing together the puzzle of Jakarta, of Indonesia, (pelan-pelan, or ‘bit-by-bit’, in Indonesian) I still don’t know a whole lot, and maybe a lot of what I “know” is really just kind of my own point of view- my own perspective, one heavily influenced by my middle-class Canadian upbringing.

But what I do know, and that I know I know, for sure, is that Indonesia and its people are incredibly friendly and welcoming. They disregard differences and find common ground you didn’t think was there. I swear I’ve met a new friend every day, and no where else have I encountered such openness, such selflessness. No matter where I go or what I do people are always happy to welcome, and are curious to know where I’m from, what I think of their country- its not a rare occurrence to be invited over, or asked to meet a family member after just minutes of chatting.

Though much of Indonesia still puzzles me, and is hard to wrap my head around – the warmth and kindness of Indonesians is crystal clear – and that’s one thing that I know I know, for certain. 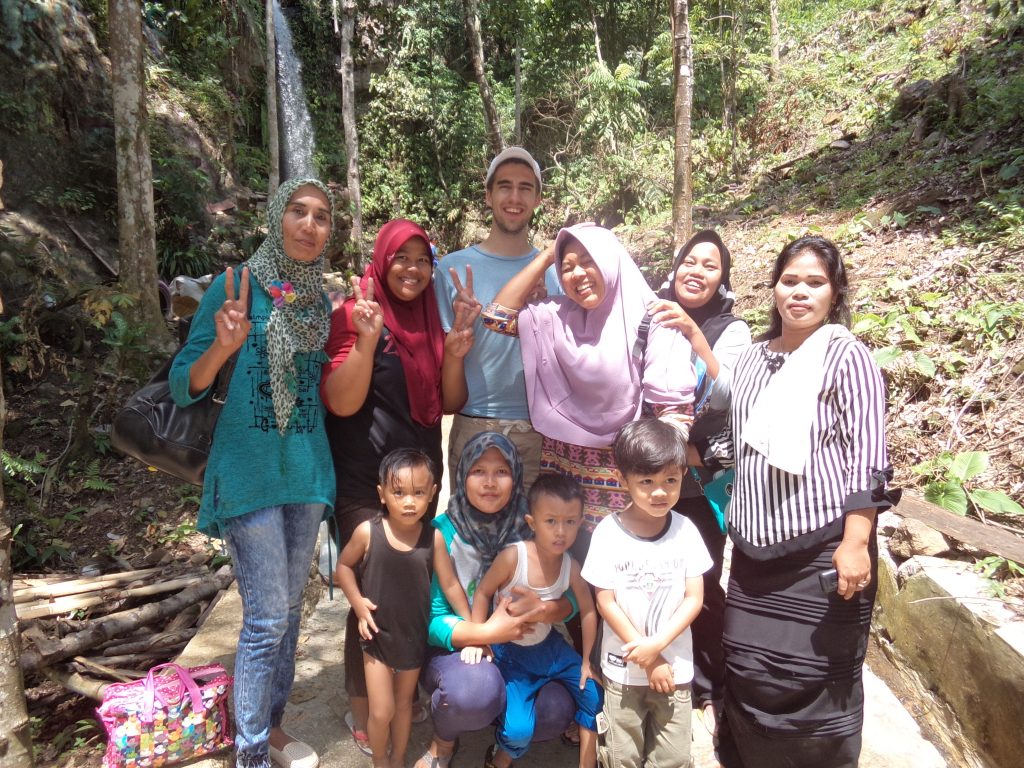 Wherever there are Indonesians, smiles are never far away!  in Kunjir Village, Sumatra