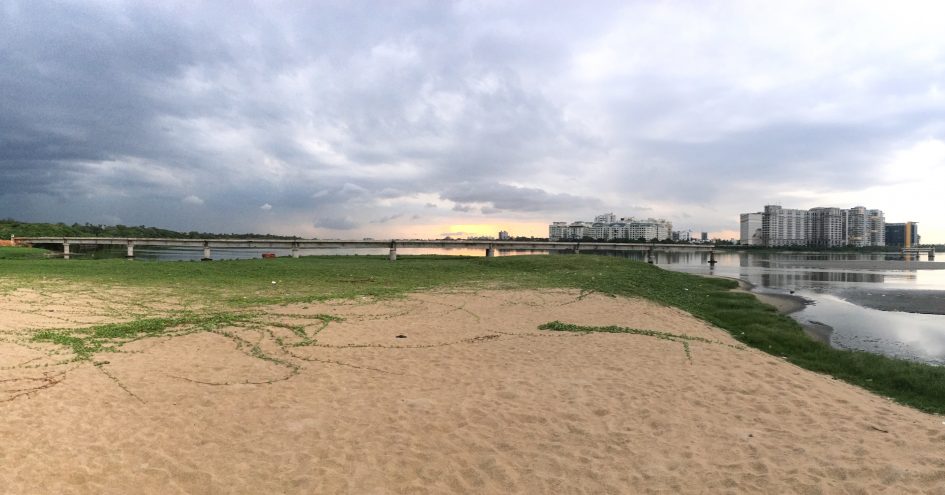 Due to tightening environmental regulations in the United States, a thermometer factory owned by Chesebrough Pond’s Inc. was exported from the U.S. to Kodaikanal, Tamil Nadu, India, in 1983. Unilever’s subsidiary, Hindustan Unilever Limited, acquired the factory in 1986.  In 2001, the factory was shut down by the Tamil Nadu Pollution Control Board for improperly disposing mercury. Seventeen years later, the factory grounds and neighbouring wildlife reserve remain contaminated with mercury-laden soil (check out the complete history here!).  Unilever conducted soil remediation trials from October-November 2017.  While this could have been a positive step forward, an analysis of the remediation trial data reveals that more mercury was released into the environment than was captured, turning a soil-mercury problem into a water-mercury problem. Despite the failure of the remediation trials, Unilever received permission to upscale the process.

This matter was recently heard before India’s National Green Tribunal, and a temporary injunction was granted against any further work at the Kodaikanal site until the results of the trial remediation could be evaluated with input from scientists and mercury experts from IIT-Madras and IIT-Delhi – some good news for us!

However, in a process drawn out for almost 20 years, a temporary victory like this is greeted with caution.  The campaign for soil remediation has been ongoing since the factory was shut down in 2001.  Given the size, resources, and international reputation of a company like Unilever, I’ve often found myself wondering how this is possible.  Well, according to Unilever’s response to the latest injunction application, environmental activists are to blame for the delay.

There is some truth to this statement, but the conduct of environmental activists is easily justified: Unilever has agreed to remediate the area to a standard that would allow 20x the mercury to remain in the soil than would be permissible by UK guidelines.  Environmentalists and social activists alike want to see the area cleaned up, but to a safe standard, not a double one. 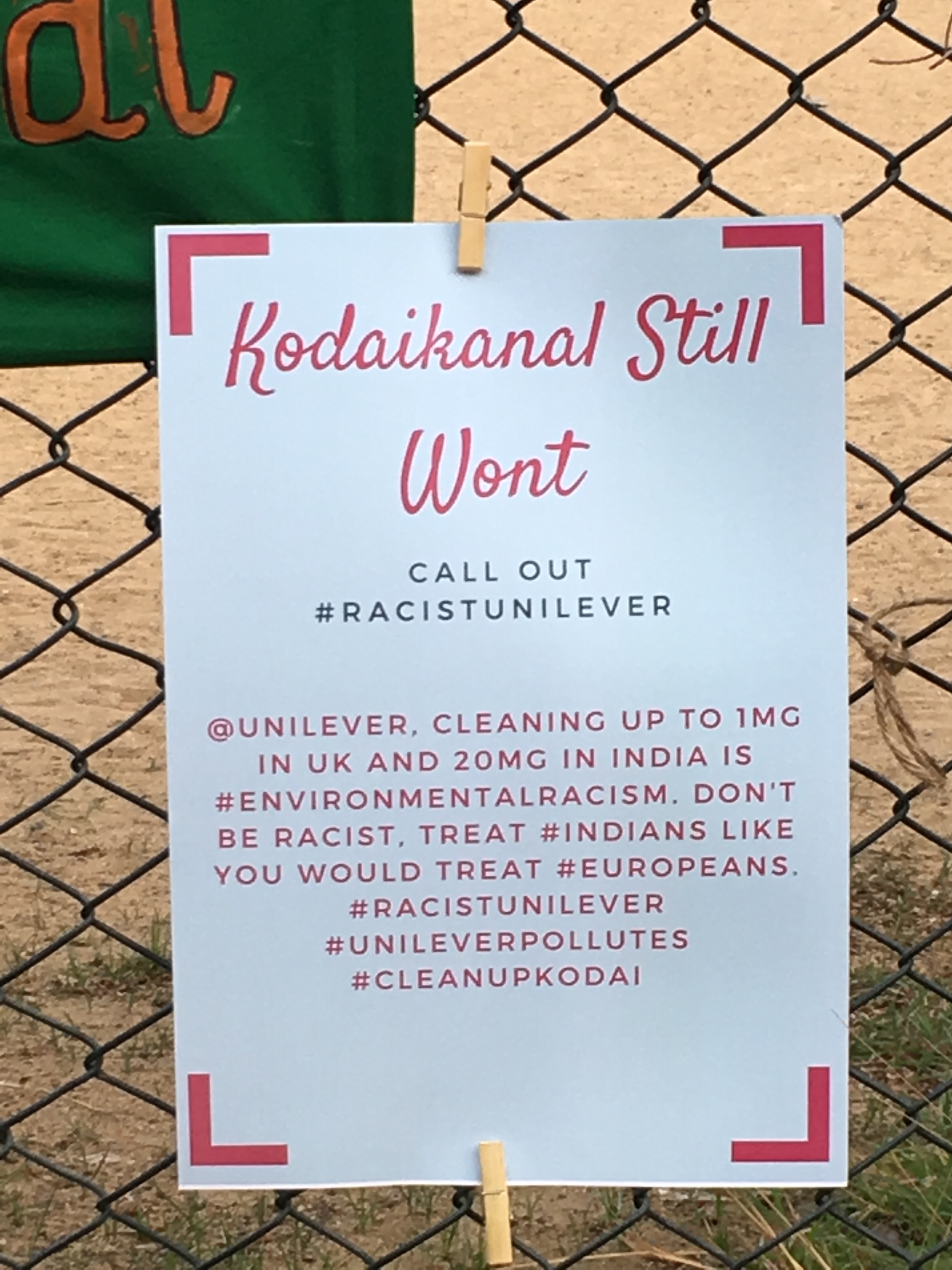 I found myself chuckling at the absurdity of the claims in Unilever’s counter affidavit, especially as they attempted to “highlight the wrongful conduct of the applicant’ [i.e. my organization].  Apparently, environmental activists have attempted to “perpetually stall the commencement of remediation work.”  Apparently, it’s not worth mentioning that the remediation target selected by the UK company was to a residential standard of 20 mg mercury per kg of soil, as compared to the UK residential standard of 1 mg/kg.  Additionally, the 20 mg/kg standard does consider that the mercury contamination is within an ecologically sensitive wildlife reserve. In the Netherlands, the target for remediation is 0.3 mg/kg, which is considered to be a sustainable level with negligible risks to the ecosystem that will allow soil to fully recover functionality for human, plant and animal life. 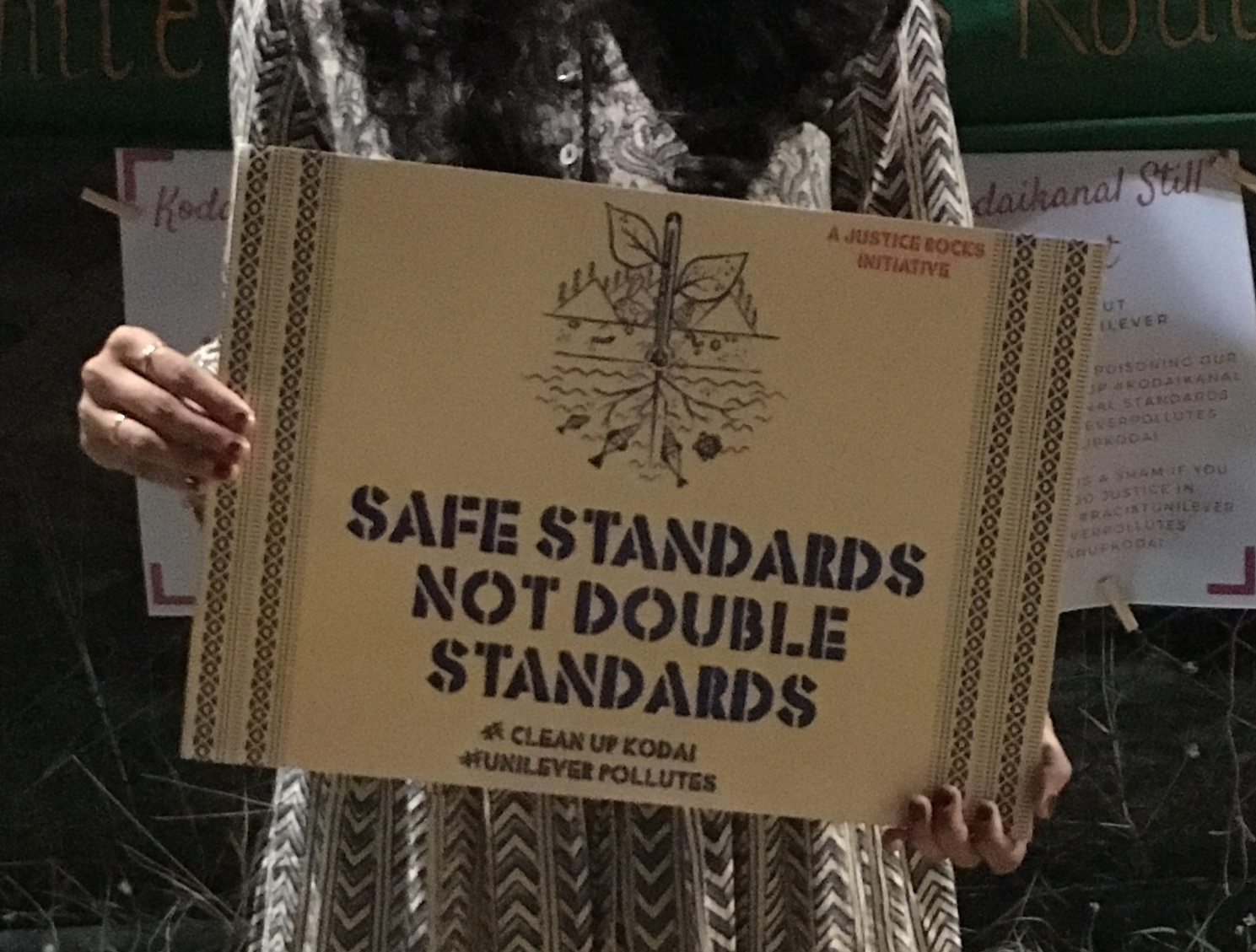 Community members at the event posed with, posting photos to Twitter and tagging Unilever.

Environmental justice is a slow, piecemeal process. With governments, laws, policies, and social attitudes continually shifting, unresolved environmental issues linger before the courts, stuck in limbo between corporate and ecological interests.  Here in Chennai, I’ve witnessed the dedication required to maintain these cases and to continue the fight for environmental justice over decades, despite numerous setbacks.  I’ve come to appreciate the patience and resolve required to see a campaign through to the end, even when the end is out of sight.  As an intern for only three months, I know I’ve experienced just a snapshot of a 17-year long struggle. 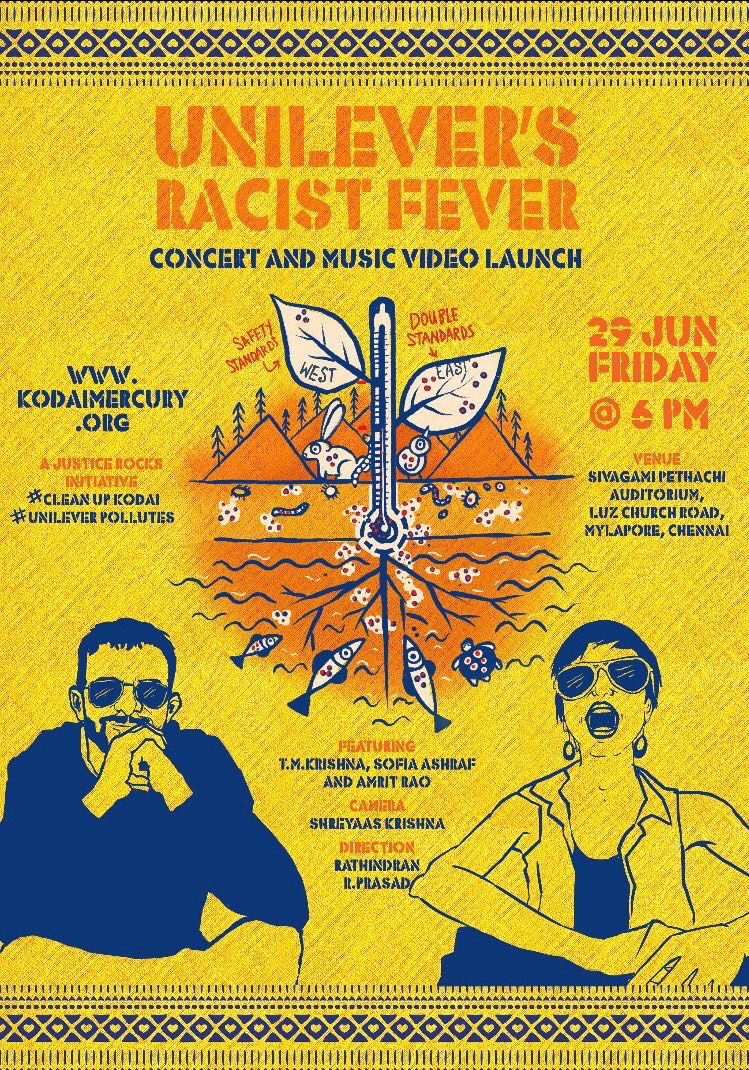 Unilever’s Racist Fever: Event poster for a concert and music video launch held to raise awareness about the double standards selected for remediation of mercury-contaminated soil in Kodaikanal.