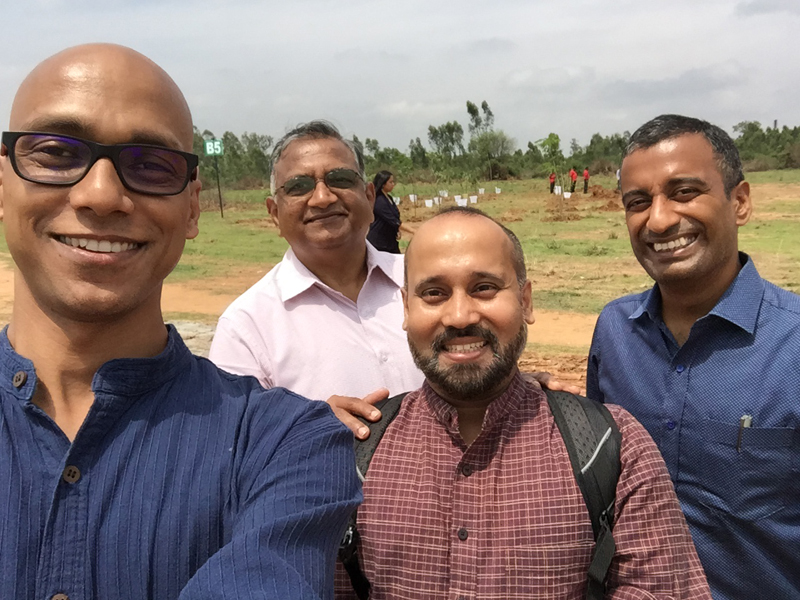 UVic Law professor Supriya Routh (red shirt) with colleagues from Azim Premji University, where his is currently on a three-month scholarly exchange facilitated by CAPI

The Indian-Canadian stand-up comedian Russell Peters once suggested to his North American audience that unless they visit India each of their five senses would never have been fully utilized. Although he did not mean this sermon as praise, once I arrived in Bengaluru, India (you may call it Bangalore as most of my Indian colleagues do) from Victoria, I could not but notice the validity of his claim. An hour-long taxi trip from the airport to the city – at 1:45 am in the morning – introduced me to the sights, noises, smells, tastes, and sensations that Bengaluru has to offer. Right from the smell of the left over Biriyani at a roadside stall to the oversized posters and banners suggesting imminent elections for the state of Karnataka, I felt at home! My first week in Bengaluru, where I am a visiting Canadian Queen Elizabeth II Diamond Jubilee Advanced (QES-AS) Scholar for three months at the Azim Premji University was spent mainly in familiarizing myself with a Bengaluru way of life set in the centre of the city and inserting myself to that life.

Once I settled down at my semi-furnished apartment with a balcony beside the Halasuru metro station, the immediate needs were groceries and tea; well, mainly tea. Bengaluru being the Silicon Valley of India, several colleagues suggested that I order food and groceries online for home delivery. But since it would be a hindrance to my exploration, I decided on going grocery shopping. The local market is an open space where vendors set up their roadside stalls with tarpaulin sheets or a bicycle-van. Making my way through that maze of people and stalls, I found a quiet corner of vegetable stalls to take a photo without offending too many people. It was lovely to smell the fresh-from-the-farm produce. I wanted to get some tomatoes, potatoes, and green chilies. Since no price tag announced their rate, those were up for auction. I inquired with the vendor their worth. 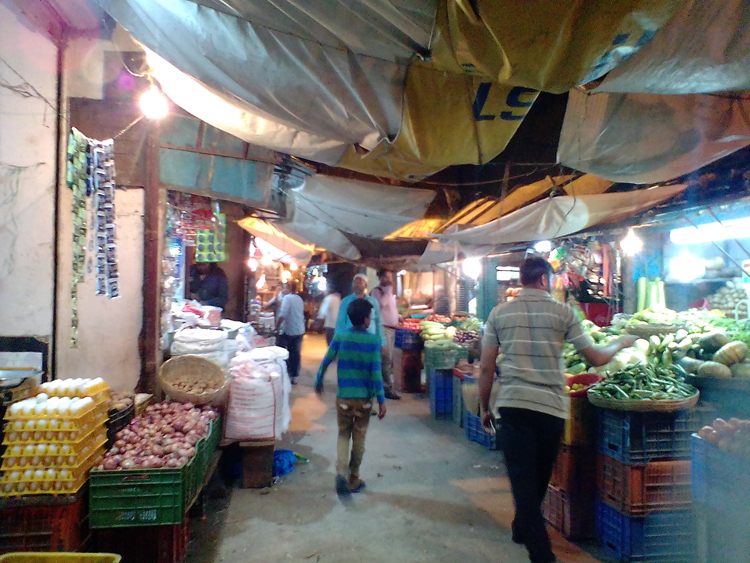 Well, one would have to remember that a price quoted by a vendor is often not the final price – it is only an ‘invitation to offer’ (as they say in law of contracts). Accordingly, my offer was much lower than the original invitation by the vendor, which upset him a lot. After a series of offers and counter-offers the deal was sealed for the tomatoes, potatoes, and green chilies; and money changed hands. It felt liberating to talk to a human being about price of vegetables, and have a say in that price. I asserted my autonomy. For about last one year, that is, ever since the Save on Foods grocery store at Fort Street and Foul Bay intersection in Victoria installed those self-check-out stalls, I have mainly been talking to machines on my grocery adventures; and I did not have much to contribute to that conversation. It is the machine that ordered me to do things, including sometimes suspecting that I (perhaps, intentionally) did not place the checked items in the grocery bag. My autonomy did take a beating and self-worth reduced to a machine’s whims!

Before my readers think that I am trying to develop a two-cultures thesis and pitting one against the other, let me move on to the second part of my grocery exploration in Halasuru market in Bengaluru. I visited a small all-purpose stationery store, which barely had a few items on the store racks. But what it prominently had was a desktop computer operated by the lady in-charge. I was looking for a shampoo here – yes, even bald people need these things from time-to-time. Since I thought that I would be wasting her time ‘just’ buying a shampoo, I bought a few other things too. When I was about to pay by cash, she inquired my phone number. I had not yet memorized my phone number in India. Sensing my hesitation in promptly giving her a phone number she – in a caring tone – admonished me: “sir, I am asking for a phone number only because next time when you buy things at our store, we can give you some discount as a repeat customer”. Lest I am perceived as not keen on a discount, I quickly pulled out my phone and gave her my number. I usually give my phone number only to stores in Canada that promise me discounts on my future purchases, that is, every store in Canada. And that’s what I call the globalization of the discount culture.

In my research, I plan to examine how a combined public/private collaborative approach to overcoming multidimensional deprivation of human development of women informal workers could be successfully realized through creative collective action devised by such marginalized women workers. Academic and policy studies often prioritize the role of state institutions in promoting women informal workers’ aspirations. Although, increasingly scholars in sociology and political economy (e.g., Elizabeth Hill, Rina Agarwala, Martha Chen) are adopting a broader approach than a state-centric one, the existing legal literature largely ignores the role of non-state entities (including workers’ autonomous initiatives) alongside the state institutions in improving workers’ lives. Following this scholarship, I am interested in ascertaining how marginalized women innovatively overcome the challenges posed by neoliberalism to the labour movement by simultaneously making use of state and non-state institutions of democratic societies.