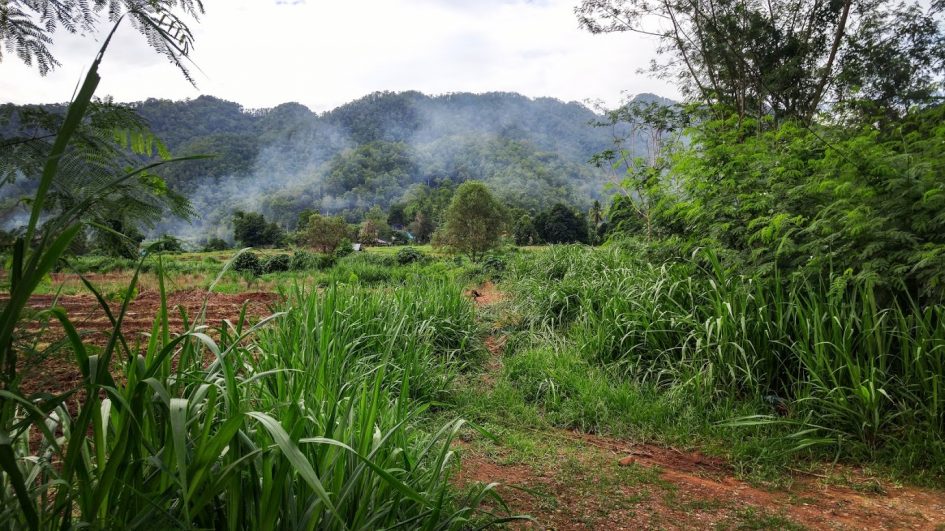 A number of weekends ago, August 5th to 7th to be exact, was an interesting one here at SDC. A hive of activity. A cornucopia of sounds. A true array of emotions. One could use all of these expressions to describe it. However, the one word that seems to best represent the happenings of this particular weekend stands as one of a much simpler diction: Fascinating. And oh what a fascinating three days it was. I say this for a number of reasons, but perhaps most notably due to the critical intersections the events exhibited with the concepts of religion and gender. Allow me to elaborate.

On the Saturday evening of the aforementioned weekend, just as I was hanging up my laundry to dry, I noticed the faint dim of candle light and a quiet murmur of voices coming from the building next door to SDC. Naturally, this sparked quite a degree of curiosity in me, and I started to think to myself “What could be happening? A meeting? A celebration of sorts? A traditional gathering?” No one, not my students nor the other teachers, had made any mention of something occurring this weekend, so what could it possibly be? At this moment, I stood both incredibly confused but also profoundly intrigued.

As it turned out, and rather fortunately for my burning curiosity, I did not have to wait long to find out what was actually happening next door. After quickly chatting with our house manager, Deh Ni, I learned that it was the beginning of a Karenni funeral, an event in which the festivities would last a total of three days. In addition to this information, I also learned from Deh Ni that the funeral was for an elderly man, a former community leader within camp, who had passed away (from an illness he had had for some time) only a few days prior. Very sad, but I was told he had had a long life full of just that, pure life. Being such an important member of the community, the festivities were sure to be of a significant calibre, and to no surprise, this was the case, on almost every level imaginable. The first night (Saturday) an almost vigil like gathering began around 7pm and seemed poised to last the entire night, with singing, praying, and the continuous drone of a large and very distinct sounding gong instrument. While this made sleep almost a second thought, the sheer cultural magnitude of what was going on heavily outweighed this rather petty inconvenience. The inner anthropologist/cultural-geographer in me was absolutely teeming with fascination, with anticipation, and with unbridled inquisitiveness.

I awoke the next day to a continuation of the chanting and the ringing of the proverbial gong. It really had lasted the whole night. Running on very little sleep but not minding one bit I set out to find out more about the happenings of Karenni funeral celebrations. In doing so, this pursuit led me to the consideration of religion and it’s place within Karenni culture and community. As many Karenni are Catholic, a practice introduced by missionaries during the 19th and 20th centuries, Karenni religious ceremonies are an interesting yet beautiful juxtaposition of Catholic proceedings and traditional (animist) culture. Of interesting note, being a Catholic event, this funeral was what we would call “open casket, with the body on display for the duration of the ceremony. A number of my students are indeed Catholic, but I had yet to witness any solid evidence of its influence within Karenni society. That is, until now. It’s truly unique. I’ve never experienced anything like it. The only parallel I can think of (somewhat) from back home is the integration of Christian and Indigenous spirituality among some First Nations, Inuit, and Metis communities. With this blending of religious traditions, both Catholic and traditional symbolism were indeed plentiful over the course of the funeral. Crosses, floral wreaths, traditional outfits, ceremonial music. It was really quite a sensory spectacle, one brought to life through the intricate meshing of these two religious traditions. Perhaps the most striking aspect of the first evening of the funeral, and for a large portion of the weekend as a whole, was this interplay of religious faith. Really fascinating. 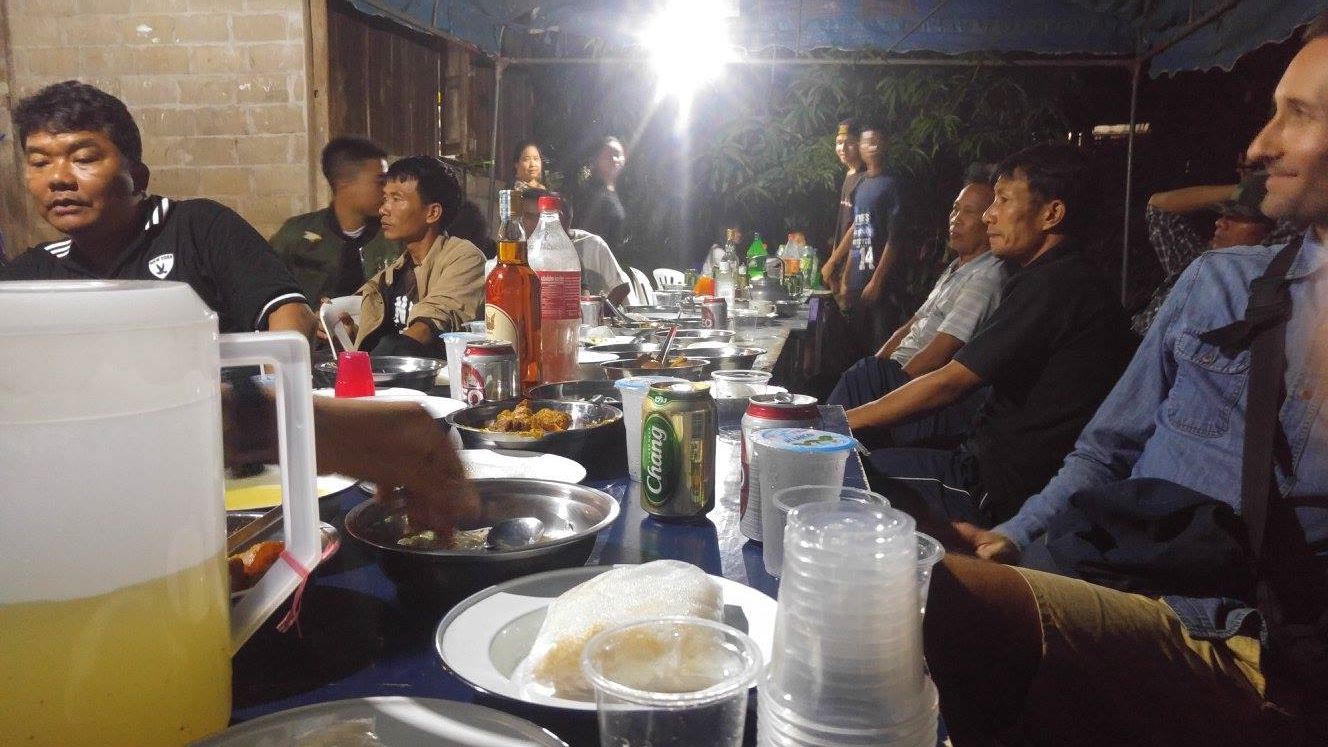 Funeral feast festivities (the jug on the left is Karenni wine)

Anyways, back to the events of the funeral. Just as with the evening before, Sunday continued on in a hive of activity. More and more people began to arrive on site and it looked as though a feast was beginning to take shape, as food and drink soon saturated the premises. A cow, a pig, and a number of chickens were slaughtered in preparation for the night’s festivities. Tents were erected, tables set up, alcohol prepared, all while the singing and praying continued inside the open air building. What I believed to be the preparations of a feast turned out to be just that. Later that day, a sizable crowd of members from the community, from camp, and even some who had come as far as Kayah State (Karenni state) in Myanmar gathered in our little neighbourhood known locally as Dokhita. It was really quite remarkable how many people were in attendance. This was by far the largest Karenni gathering I had seen to date. The atmosphere was absolutely alive with activity, as this was not, it occurred to me, a typical funeral characterized by sombre vibes, but rather a celebration of life brimming with positive shades of reverence. Myself and the other volunteer teachers were lucky enough to be invited to this feast and respectfully accepted such an invitation. Before long, food and drink began to flow freely, characterized most notably by the aroma of rich beef curries and the unmistakable presence of Karenni wine (a locally produced wine made from either rice or millet). In tandem with the food and drink, traditional singing, dancing, and all sorts of music stood as almost omnipresent for the entirety of the feast, with bands of flutes and drums filling the air with a sonic medley of sound (see youtube link under the next photo). This all continued, both the feasting and the music, into the wee hours of the morning. I consider myself very fortunate to have been invited to participate in such an important community event and am ever grateful for the hospitality this community has shown to a young university student from Canada.

It is largely with this feast, but also with the events of the weekend altogether, that some critical reflections regarding the notion of gender come to mind. Gender, as I have come to observe over the past three months, occupies an interesting position withing Karenni society. While many aspects of life here appear to the outside observer as relatively equal between men and women (relative to other cultures, that is), there remains a stark divide – more so than I thought – between male and female, primarily in relation to activities/behaviours. In more ways than one, I have struggled with this reality. Struggled to understand. Struggled to comprehend. Struggled knowing the consequences of such a reality, particularly for our female students. This gendered divison manifiests itself in a number of ways, including traditionally set gender roles, domestic violence (which is a rampant problem within camp), and gender-based beliefs (eg. Ideas surrounding menstruation, which include women having to hang their laundry below the height of a man’s head due to beliefs associated with impurity.)

The events of this funeral weekend provided a concrete example of the existence of this disparate divide between men and women. For the feast, apart from the slaughtering of the animals, the women did seemingly all the preparations, including the cooking and cleaning. Furthermore, as I observed during the feast, all of the chairs and tables were occupied by almost exclusively men. Contrast to this, the women were the ones washing dishes, bringing more food, etc. The male domination of this social theatre was striking. However, this simply represents a reflection of gender relations across Karenni culture as a whole. Gender roles are deeply embedded into the fabric of everyday life. Even with my students at SDC, the women do a majority of the cooking, shopping, and cleaning, while, lots of the time, the men just hangout. The implications of this are significant. As the course we are currently teaching focuses primarly on activism and community management, we have been trying to stress and implement practices for our students that promote gender equality in all aspects of life. These are even as simple as having our guys pull their weight with the cooking and/or cleaning.

Our students, a majority of whom are women, have learned about gender equality and gender perspectives through their previous course(s) at SDC, and such subjects have been touched on, and will be touched upon again, throughout the advanced course. This is great and very important to learn about, especially considering how deeply and historically embedded the patriarchal ethos surrounding gender is within Karenni society. As a feminist myself, I’m glad this is being given an adequate degree of both time and attention. It’s worth it.